Community sends teen off with a parade 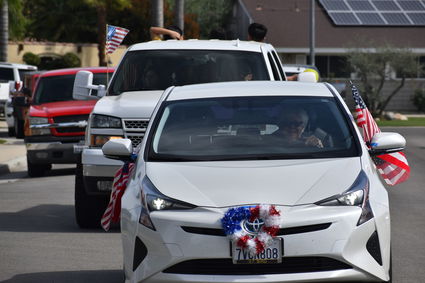 Cathy Prout's car, decked out in red, white and blue leads a number of cars in the parade.

Shafter High student Nick Garza, who was diagnosed with leukemia just a month before the start of the SSL wrestling season, received a hero's parade as he prepared to travel to Los Angeles for a bone marrow transplant.

The Kern County Fire Department led the way, followed by the Shafter Police Department, and Councilmember Cathy Prout, whose car was decorated with red, white and blue.

A large number of cars followed, some decorated with balloons and a lot of them with posters with encouraging slogans on them.

Garza's father, Tomas Garza, said that they were leaving on Sunday morning to make the trip down south. Garza was going to be tested first for the coronavirus, and then would go through a series of tests to prepare for the bone marrow transplant.

Garza said that he has felt good, and he was smiling as he waved to community members, including his teammates from the Shafter High Wrestling team, as they drove by. 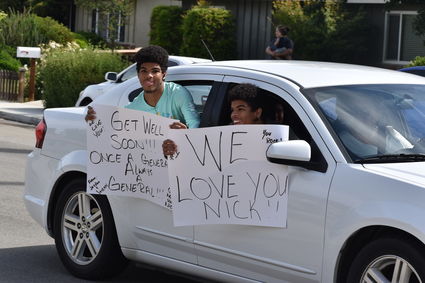 The wrestling community turned out for Nicolas.

Garza and his family are so grateful for the support that the community has shown. "This was such a last minute deal, but with Cathy Prout, the Police Department, Fire Department and the rest of the community, it came together," Tomas said.

Garza will be down south for three months. He will have the procedure, and, after a hospital stay, will spend his recovery time at a nearby hotel or apartment.

Garza was preparing for his wrestling season in which he expected to battle for a starting spot on the varsity squad.

But, after having pain in his abdomen and shoulder, doctors ran blood work. Tomas and Nicolas had not even made it home before they received a call to come back to the hospital immediately.

The diagnosis was given, and Garza was transported to Valley Childrens Hospital in Madera. "It was so weird. It was just a few pains. You never think it would be something like this," Garza said.