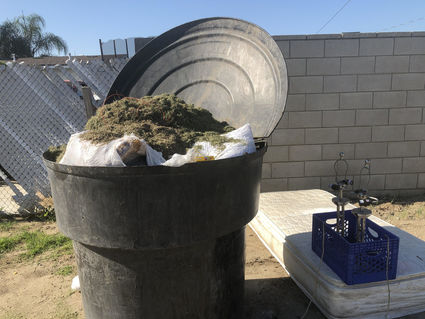 An alleyway off Atlantic Avenue in Shafter.

The coronavirus pandemic has affected not only the city's different businesses, the schools, and city office buildings, but it is also touching other phases of everyday life. For the individuals who pick up our garbage, there is an added challenge to their already demanding job, as they must navigate their way through the process of emptying our trash, not knowing if that household had been touched by the virus or not.

Coupled with this challenge is the fact that so many residents are either staying at home on their days off from work, or might not be going to work at all, with their place of employment either closed temporarily or with abbreviated hours.

With that free time, many residents are using it to do home improvement projects at their homes, or doing major spring cleaning, gathering a more trash and debris that is slated for the landfill.

Unfortunately, as the COVID-19 cases seem to be growing, so are the instances when that trash is not making it to the local landfill, instead being dumped in residents' trash containers or into the alleys beside the trash containers.

On a recent Tuesday morning, in a five-block radius, there were a collection of mattresses, a television, a washing machine and other debris littering the alleys behind Atlantic Avenue.

Contrary to popular belief, the City of Shafter does not have a designated crew to handle items that have been illegally dumped in our alleyways.

According to Public Works Director Michael James, this has become a problem that has grown especially since the Stay at Home order had been given, with an increase of people involved in DIY projects around their homes. Residents are encouraged to make sure to dispose of their garbage in a legal manner, be it regular trash or construction material or bulky items.

Residents who wish to dump regular trash at the local landfill will not be charged anything for the load. "As long as the trash is separated, and the load is all regular garbage, there is no fee," explained James. "Unfortunately, it seems that a lot of people are unaware that they can dump their trash at the landfill at no charge."

When items are dumped illegally in the alleys of a neighborhood, funds have to be taken out of the city's General Fund to cover the act of picking up the items and disposing of them properly. "We don't have a crew that is designated to pick up illegally dumped items, " said James. "We have been fortunate enough in the past to have American Refuse hold a couple of bulky waste events in Shafter that allows the residents to dispose of those items not considered regular trash, without a fee for the service. Unfortunately, the bulky waste event that was originally scheduled for last month had to be cancelled due to the coronavirus issue." This has resulted in an increase in the amount of trash that is being found in our alleys sitting beside the barrel cans.

This may not be a problem in the not-so-distant future, as James said that the state is implementing state legislation that will ultimately result in the stoppage of using the big barrel cans used in alley collection. "Eventually, all residents will be given their own containers that they will be responsible for. We are hoping that this will help alleviate the issue of illegal dumping, with the absence of the big cans in the alleys.

In the meantime, residents can help make their neighborhood look great and help the hard-working drivers and collectors who pick up the city's garbage. Lynnda Martin of American Refuse said, "People can make sure not to overfill their containers, as well as avoiding putting trash and debris beside the cans, which make it necessary for the drivers to get out of their truck and handle the garbage to get it into the truck."

As the city of Shafter unites to face this pandemic by showing our solidarity and strength, we also need to help the workers who serve us keep our city clean and safe.

Jamie Stewart is editor of The Shafter Press. The opinions expressed here do not necessarily represent the paper or its management.