Coming together at worship service 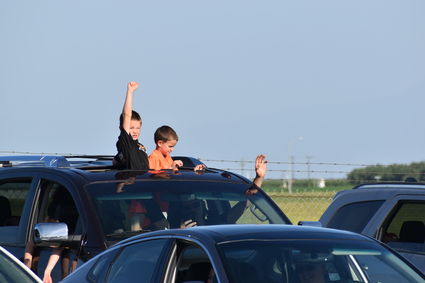 Worship songs got the young and old praising.

With the state's Stay at Home order in effect, a lot of people in the community have been missing going to church and fellowshipping with other people in the congregation.

The event, organized by Chris Starrh and Councilmember Chad Givens, was held in the parking lot of the Tin Cup.

"Chad mentioned to me that their church had held a service in their parking lot on Easter Sunday, so we decided that it would be a great idea for our Community Worship Service," said Starrh.

As vehicles entered the lot, they were parked in a semicircle, pointing toward a makeshift stage area where the praise team was set up.

It was reminiscent of the drive-in movie theaters that were operating years ago. The lyrics of the songs performed by the praise team, led by Alex Gonzalez, were available on their Facebook page, allowing attendees to follow along.

Attendees were encouraged to remain in their vehicles to abide by social distancing requirements.

The isolation of the vehicle did not stop worshippers from enjoying the service, as attendees could be seen with their hands raised in their vehicle, or in the air outside the vehicle as the band played several worship songs.

Givens said that this was a great way for people who have been so isolated to come together and worship as a group. Starrh added that this was the largest group to attend one of their community worship services, which have been held monthly until gatherins were limited to 10 people. "We didn't have a service in March, so we ended up just missing one month. This is such a blessing, and gives people a chance to worship somewhere other than their own house."

Pastor Steve Seymour, of Jesus Saves International Church, spoke for a bit about the opportunity the people have to worship God as a group. 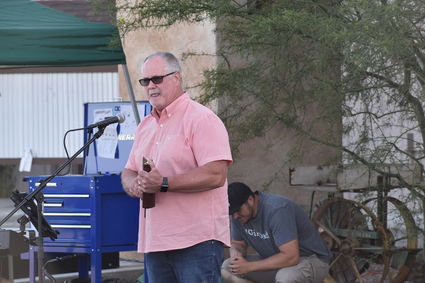 "I know that I have missed walking into the House of the Lord, getting those hugs from the congregation, but we don't have to make this a loss, but an opportunity for us to grow."

Seymour said that he believes that this time is a great opportunity for people to grow in their relationship with Jesus. "It is wonderful worshipping in the Lord's House, but it is time now for us to take the worship to our own house and enjoy the Lord's presence in our homes."

The service concluded with a time of prayer. Starrh encouraging everyone in attendance to pray for first the nation, then local leaders, communities, families and, finally, ourselves. "I have grown so much during this trying time, and have come to realize that I have a lot of work to do on my personal walk with the Lord. But I have had an opportunity to pray and grow so much, each day taking on a new task that lets me grow stronger."