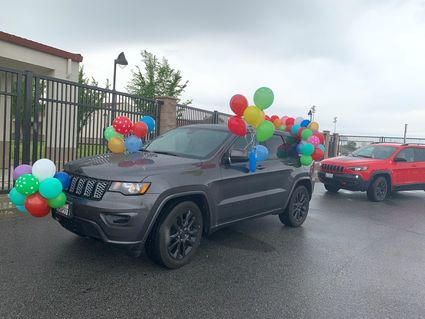 Special education teacher Lorena Gonzales, her aide and a student drove a balloon-covered car in the parade.

The rain didn't stop their parade.

After a week of 70-degree weather, residents were surprised to wake up to showers on Friday, but people stood outside with umbrellas to see their favorite teacher pass by.

The Wasco Union High School District staff had looked forward to ending Tiger Trek Week with staff members driving up and down the streets of Wasco with balloons, large signs and whatever could be sturdily affixed to their vehicles. Staff honked and waved to anyone who stood in their doorways or front yards.

Athletic Activities Secretary Kyna Mecham said about 40 staff members pre-registered to participate in the parade. The committed staff members began lining up their cars in the school parking lot for the 12:30 parade. 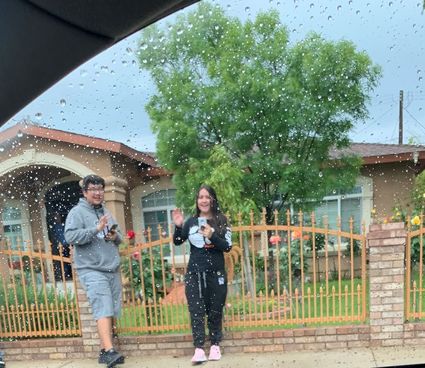 Onlookers cheered on the drivers as they drove through the streets of Wasco.

The parade consisted of a large snake of vehicles, mostly decorated with orange and black, and heads hanging out of windows shouting to remind the crowd to stay home and stay safe. The cars drove up and down the streets of Wasco honking their horns and shouting out the windows.

Some rain-soaked signs were taped to the outside of vehicles while others were taped inside car windows. Those who painted on their vehicles had better luck with their slogans remaining visible for the entire parade.

A car driven by special education teacher Lorena Gonzales was covered with colored balloons. Assisting her were her aide and a senior.

The parade took about two hours to complete. Teachers and staff members were all smiles and many families joined in shouting along the streets.