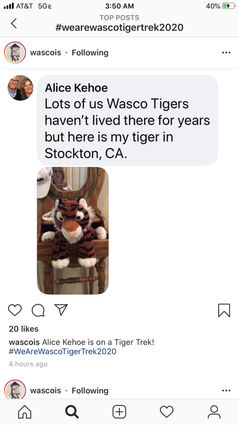 This tiger was posted by Alice Kehoe, a Wasco High alum now living in Stockton.

The city has seen an influx of sightings of its mascot in recent days, with striped felines spotted all over the city. They can be seen mostly in neighborhood windows, thanks to the industrious mind of Sharon Sharp and other community members.

Sharp was inspired by events recently held in other communities, in which residents put teddy bears in the windows of their homes for passersby to take pictures of when spotted. Sharp thought this would be a great way to keep kids and families involved with each other during the Stay At Home order. 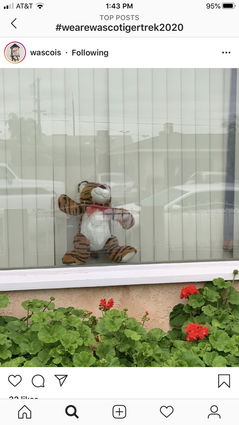 This tiger was spotted peering out of a neighborhood window.

Since Wasco is a tiger town, she thought stuffed tigers would be more fitting than teddy bears. Sharp then contacted Tonia Cordova, who created a flyer to promote the event.

Sharp said Hailey Coyle of Wasco High Schoolgave her valuable feedback. Coyle told Sharp that they had already been planning a weeklong event called We Are Wasco and that the "Tiger Trek" would be a great addition. She then contacted the Orange Heart Foundation, Toys for Tigers and the Wasco High Associated Student Body, and the project came to fruition.

Each day of the week has a different theme. Beginning on Monday, residents were encouraged to create chalk drawings on their sidewalks and driveways.

To view the tigers that have been captured, search for the hashtag #WeAreWascoTigerTrek2020 on Instagram. Residents and others are encouraged to still take pictures of tigers that are on display and post the pictures online.