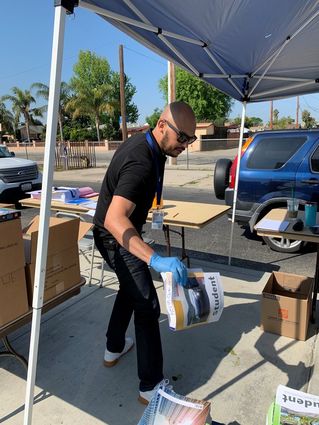 Principal Danny Arellano directs walking students to wait for a few minutes while he gets their packet and Chromebook.

The announcements that Thomas Jefferson and Palm Avenue Middle Schools were giving out Chromebooks to their students Tuesday April 14 through Thursday April 16 were found in the Tribune, on Facebook and Wasco Is.

This was good news to parents because students began the second phase of distance learning on Monday.

Cars began lining up outside of TJ around 9:30 a.m. for the beginning of the 10 a.m. distribution. In many vehicles, students were seated next to their parent, which gave them an opportunity to say hi to staff working at the distribution site.

Thomas Jefferson Principal Danny Arellano estimated that about 300 Chromebooks would be given out at TJ. "We have over 600 students, and about half have wifi at home," Arellano said. "The students are also able to pick up a packet of homework material, which includes the same information available on the Chromebook. The only difference between those with or without a Chromebook is that those with the Chromebook will be able to submit assignments through their device, while students who don't have a Chromebook will turn in their completed packet of work.

"Overall today we handed out approximately 290 Chromebooks with school work. We will continue the distribution for the next couple of days (I anticipate we will hand out at least another 100 by the end of the week)." Arellano said. "We will also be open next week in case students didn't get the information this week."

Arellano also said that he thinks some students will be able to get a "hot spot" off their phone for internet access while others will continue doing their work on paper and workbooks. 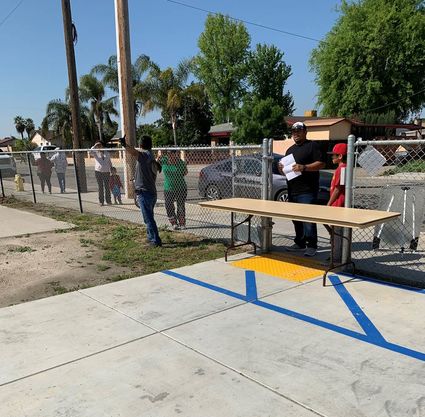 Over at Palm Avenue, parents were also lined up waiting to reach the front of the line to pick up a Chromebook and homework packets.

Upon arriving at PA, Principal Oscar Luna was spotted assisting a parent with a jump start.