Students get up-close look at careers 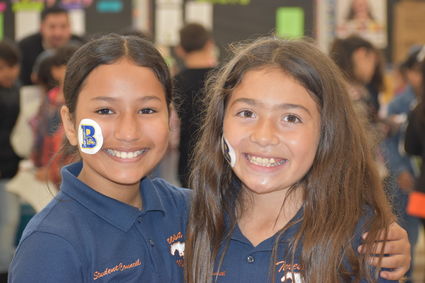 Students at Teresa Burke Elementary School were able to get a personal look at a variety of future careers at their annual Career Day Friday. Over 20 local businesses were on hand to answer questions about their respective careers and businesses as the students peppered them with different questions.

Among those on hand were the Wasco Tribune, Cal State Bakersfield, Wasco Elementary School Nurse and Cimulated VR Arcade, which was one of the most popular guests there.

Cimulate brought a virtual reality simulator and demonstrated how the game was played. They

drew a great crowd of the kids transfixed on it.

A good number of the students said that they were interested in virtual technology and wanted to know what it took to get into it. Manager Jennifer Forsythe told the students that you needed a desire to work with people to be a manager, and it takes a computer science degree to be able to excel in the gaming and graphics field.

There were also reps from the local Union Bank that told the students what it is like to be involved in the financial industry. 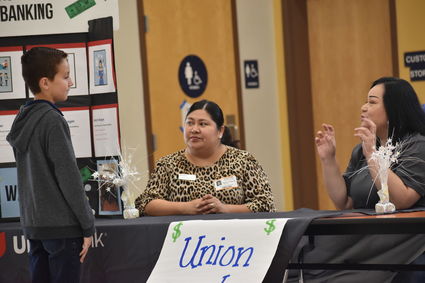 Representatives from Union Bank told the students the benefits and rewards that comes with working in the banking industry.

At the Wasco Tribune table, the students asked questions about the different positions that are involved in a newspaper and what skills it takes. Editor Jamie Stewart told the kids that a love of writing is a plus as well as liking photography. "If you can find a job that you get paid for something that you really love to do, that is the best you can ask for," Stewart told his visitors.

School historian Emily Lopez, who was taking pictures of the event for Teresa Burke, said that she loves to write and take pictures. "I love writing a lot and would like to get into this field."

There were also a large group of the students who were thrilled looking at the recent issue of the Tribune that featured the Wasco Bengals football and cheer camp, in which many participants were pictured.

This event gave the students a variety of professions, and first-hand knowledge of what each career entails.