Fears lead many to stock up 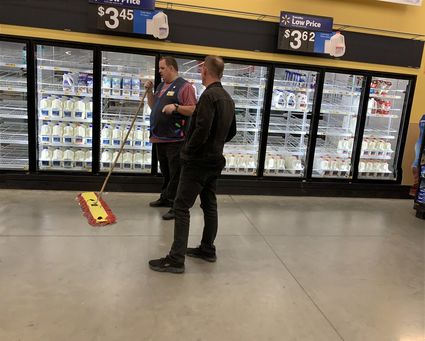 For employees, it's business as usual keeping the store clean.

Walmart was the store that carried everything a consumer could need or want; however, times have changed, for now.

Walmart has been the go-to store for many households; however, that isn't the case today. The shelves are not a neat and orderly as they once were because of the coronavirus pandemic.

A Walmart employee who asked not to be identified said that the store is distressed because it can't supply the needs for the local community. "We are having trouble keeping up with demand," the employee said.

The items first to go were water, toilet paper, any type of disinfectant wipes and perishables. "We just began limiting water to one case per person," the employee said.

The employee also said that most of the store's items are the same price they were several weeks ago, unless they are on a "rollback," which means an even cheaper price for an item.

Prices stood out underneath the empty shelves. The remaining food items looked well picked over.

A traveling couple originally from Canada were visiting relatives and stopped by to pick up something to eat. They walked out with a small box of muffins. She said they had just returned from a vacation in Mexico ,and her daughter kept telling her to come home to see what was happening. 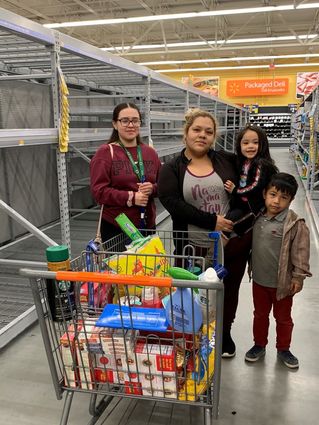 Maria Hernandez from Lost Hills tried to do some shopping.

"We were in China over three months ago," the woman said. "That's too early for the virus contamination. I'm healthy, my husband is healthy, and we both haven't been sick at all."

Maria Hernandez was shopping with her children for food for the week. "I have to feed a family of seven," she said. "We're from Lost Hill,s and I thought there would be more here."

She had some misgivings about her children being home from school for a long period of time, but was happy they each received a packet of school work and projects to work on from their teachers; however, two of those children were too young to attend school.

The liquor section of the store was full. There was plenty of beer and wine to go around, and the selection was large.