Bengals usher in season with minicamp 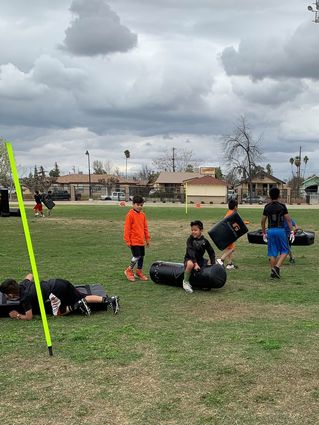 Younger future Bengals football players were having fun on the field with the equipment.

The mini-camp was at Wasco High School, where over 100 participants displayed their skills for a spot on one of the cheer or football teams.

Overseeing the Bengals cheer squads will be Tess Barulich.

Participants numbered about 100 for the football portion and about 50 for the four cheer squads. "We have all of our JAMZ Championship varsity cheer squad returning from the JAMZ champion squad with the exception of one new girl," Cheer Rep Cynthia Torres said. "We are looking forward to another successful year."

Cheer coaches and football coaches were available to help run basic drills in both sports. Gonzalo Cruz was the coach in charge of the event, along with Bengals President Juan Bernal.

"We have a total of 25 coaches this year," Cruz said. "Some WHS varsity football players will be coaching the kids."

Cruz described the minicamp as a way to give the kids the basics of both cheering and football so they know whether or not they want to try out when the time comes.

"It isn't until the younger teams play their first game that they begin to realize what teamwork is, and how cooperation, communication and responsibility come into play," Cruz said.

On the cheerleading side of the field, leading the freshman Bangals cheerleaders in the basics were 2019 Rose Queen Elisa Flores and Gary Muhammad. The coaches for the sophomore Bengals squad will be Karina Figueroa, Alexis Figueroa and Makayla Gutierrez, while junior varsity squad will be coached by Cheer Representative Cynthia Torres and Cheer Advisor Ruth Loza. Varsity cheer coaches will be Marina Flores and Meagan Leyva. 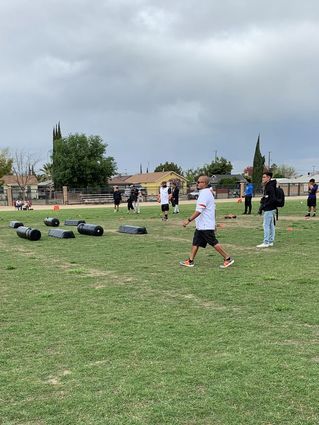 Coach Gonzalo Cruz makes sure everyone is on task.

Each of the cheer squads performed a routine in front of all attendees at the camp.

Following the cheer routines, the football players all lined up in two even teams equally distributed by age, where they began to compete with each other in an obstacle course. Some players were able to catch the football with ease, while others watched it slip right through their fingers.

The first part of the obstacle course had the boys diving underneath a chair. A couple of boys showed off their agility by dropping and rolling underneath the chair and immediately getting up to a running start for the next part of the course.