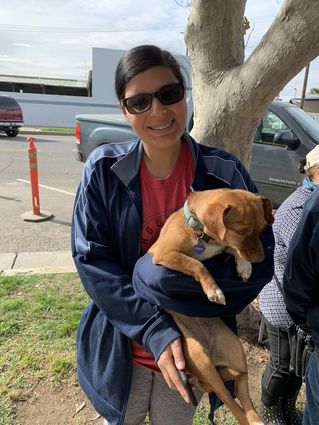 Bakersfield Boxers and Bullies showed up in Wasco for another low-cost clinic for pets.

Bakersfield Boxers and Bullies pulled up in their large mobile unit at 8 a.m. on Saturda to begin their vaccination and spay and neuter clinic. The event was held at the Old Courthouse.

Mayor Tilo Cortez and a number of volunteers were available to assist Bakersfield Boxers and Bullies Rescue in managing the registration line, directing people where to go for their procedure and communicating with the pet owners to make sure all was well. A lot of pet owners and their pets were photographed by friends or family, along with a volunteer or two snapping photos.

The owners with their animals were gathered on the courthouse lawn ready to begin the registration process and be directed to their next location.

"We had 100 preregistered," Owner Sundee Marineau said. Plenty of others were walk-ins.

Abigail Goss and Jajach Bryant were assisting Sheriff's Deputy Patrick Basquez with the registration process. They handed out forms to attendees and directed them to their next destination. 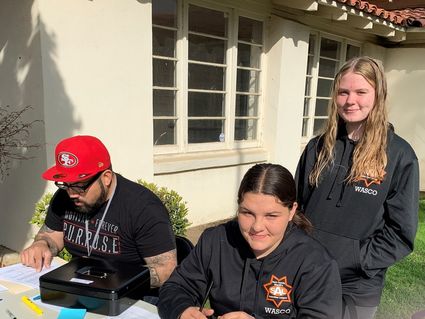 Waiting in line to register her rottweiler, Rosalinea Raya stated that she has owned Lexi for eight months and was waiting to get him vaccinated. Also waiting for her dog, Cinnamon, to be vaccinated was Jackie Nunez.

Jennifer Dias was doling out vaccinations to those who needed them.

About 15 dogs with their owners were waiting on the courthouse lawn to register for a procedure or obtain a license.

"We were able to be in Wasco again because we received a private donation," Marineau said.

The organization requires money for another clinic.

"We are in need of funding in order to hold more of these mobile clinics. It costs $500 a day to run the clinic. This is a tax write-off for anyone willing to donate," she said.

Those interested in donating to Boxers and Bullies Rescue can call 661-472-6133.