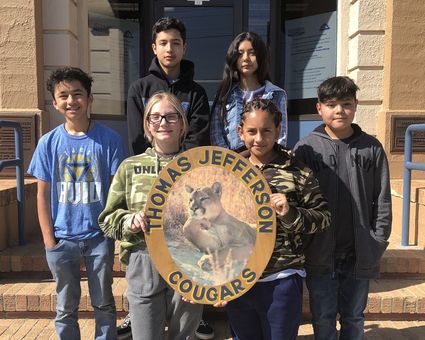 The Cougar of the Month Award is designed to spotlight students who best show "Respect the PAW" (Perseverance, Attitude and Wise Choices) at Thomas Jefferson Middle School. The following students were selected for the month of February.

Yatzary Orpineda has been selected as Cougar of the Month for sixth grade. She is very proud of her grades and being a Cougar. Yatzary is also excited for many other reasons, she says.

"I never thought my first year at Thomas Jefferson Middle School [I would] be getting Student of the Month." She looks forward to becoming a seventh grader next year.

Excelling in all her classes, maintaining A's and B's, she has proven herself a model for her peers in exhibiting perseverance.

The second sixth grader selected was Adam Alvizo. He was excited and surprised to be selected, and he has shown himself to be a great student who works hard to do well in all subjects. Adam makes wise choices by double checking his answers and pushing through in math class, his hardest subject. He is also very proud of all his achievements and his ability to hold a minimum 3.0 GPA.

Kierdyn Wilson has been selected as Cougar of the Month for seventh grade. This is a great accomplishment for Kierdyn, and she is excited to finish off the year knowing it will put her a step closer to her dream college.

She states she is proud of many things "but most of all, I am proud of how I never give up." Recognizing science as her toughest subject, she keeps her positive attitude as she pays attention to each lesson and studies hard.

"I'm most proud of my grades and trying my best by using a growth mindset," he says.

Pedro pushes himself to always reach new goals, even in P.E. as he struggles with his miles. He doesn't give up and does his best to reach a personal goal. Proud of himself for earning this recognition with his positive attitude, he looks forward to the end of the school year and seeing his peers accomplish their goals as well.

Melissa Vargas has been selected as Cougar of the Month for eighth grade. She hopes to finish off the school year holding her 3.8 GPA that alone will bring her happiness and make the year a success.

"I am most proud of making my mom happy about my improvements" because she has worked hard in her ELA class in order to succeed, she says.

Instead of falling behind, she chooses to push herself and ask for help, making wise choices.

Aidan Alcantar also has been selected as Cougar of the Month for eighth grade. Over the course of the school year he has persevered through difficulties in the classroom in order to succeed.

Aidan acknowledged his struggle early on and is proud in knowing he has proven himself by picking up his grades and holding A's across the board.

With English being his toughest subject, he has not given up and works hard, earning the award with his perseverance.