Some Dial-a-Rides to cost more 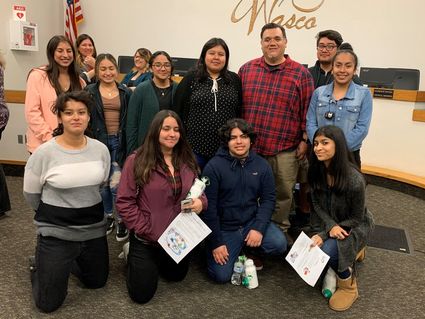 The city eliminated the 13-ride pre-paid card and made it 10 rides for $17.50 for adult riders. For seniors (62 and older and disabled riders), the Dial-a-Ride pass rate remains the same at 11 rides for $10.

City Manager Daniel Ortiz-Hernandez said the increase will take place in July of this year. "The city has been losing money at the old rate," he confirmed.

The city will be placing this information on its website in order to help make the information public.

Also at the council meeting, the government instructor at Wasco High School, Paul Ante, brought students from his class to observe the council at work.

Ante explained to the council that he wanted his students to observe how a council meeting was run in order to help them become better leaders.

The council also unanimously passed an Ordinance amending the Municipal Code adding a chapter on Drones and Unmanned Aircraft.

Councilmember Gilberto Reyna reminded members that he questioned the ordinance when it was first brought up at the Nov. 19, 2019, meeting that he was concerned where people would be able to fly drones in areas within the city.

The ordinance says that no one shall operate a drone within the city without first registering it with the city and obtaining a city registration number. Registrants must be at least 13 years of age.

There is a list of items in an attachment that the, public can obtain from City Hall.

If a violation occurs, the person using the drone will be charged with a misdemeanor.

The ordinance will go into effect in 30 days.