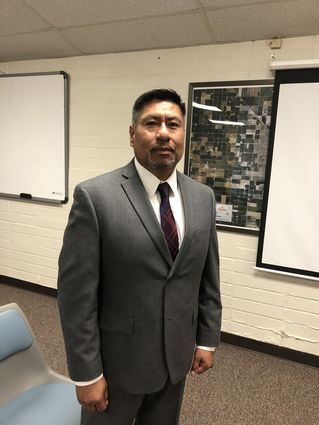 Gilroy's city administrator is the Shafter City Council's selection as the next Shafter city manager.

The 4-1 vote Tuesday night ended a four-month search after the controversial resignation of Scott Hurlbert.

Gabriel Gonzalez has 15 years of experience in the city manager role for three other cities, including Arvin and Mendota, and is excited to come to Shafter.

"Even when I was in Arvin, when John Guinn was the city manager for Shafter, I could tell that the city was growing and was doing things to set them apart from the rest of the cities in Kern County. Shafter has been on my radar ever since."

Gonzalez has 25 years in municipal leadership roles, beginning in the City of Arvin. He was finance director there from 1995 to 2001. From 2001 to 2004, Gonzalez served as the director of managed care and facilities for Clinica Sierra Vista, a provider of health services in the Valley, then became Mendota city manager in 2004.

Last night, after meeting in closed session, the council reconvened and voted on the agreement with Gonzalez. The move passed by a 4-1 vote, with Councilmember Cathy Prout the only no vote. They also voted to extend the contract agreement with Acting City Manager Jim Zervis, whose contract ends this month, in order to allow Gonzalez to give Gilroy a 30-day notice. They also voted to give Zervis a one-time performance bonus of $5,000 in addition to his regular salary.

Gonzalez said that he was contacted by the recruiting firm hired by the city and considered the opportunity a chance to return home. He said that with the technology advantages and the unique education partnership that Shafter has, he is very excited to help Shafter continue to grow.

"I am looking forward to working with the City Council, the staff and the community in keeping Shafter a model for other cities in the area, the kind of city that they would like to be when they grow up," he said.

Under the approved contract, Gonzalez will be paid a base salary of $215,000. He will also receive an insurance package the same as other department heads in the city. Gonzalez also will receive a monthly $400 car allowance and a $100 cell phone allowance. There is also a relocation reimbursement of up to $2,000.

In other action, the council approved a one-year lease with the Shafter/Wasco Publishing Co. for the building that houses The Shafter Press and Wasco Tribune at 406 Central Ave. The monthly rent is $565 per month.

The council also approved $150,000 for improvements to the Shafter Aquatic Center. The work will include a new shaded structure. The city had originally planned to have a project that would resurface the pool, rebuild the snack bar, install the shaded structure and take care of ADA accessibility improvements.

This project was scaled down to include only the shaded structure and the ADA work when the amount of a grant was not as large as was anticipated. The $67,000 in additional funding will make up the difference 0,000, and other work will be paid for with the grant of $83,000.

The council voted unanimously to add the project to the 2020 budget.