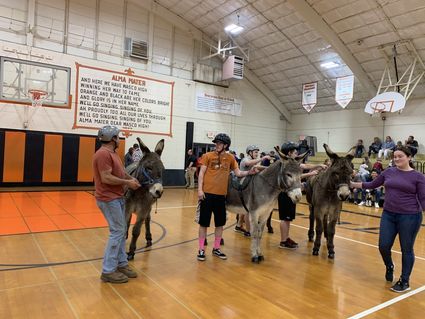 Members of the alumni team chat before the game begins.

To Wasco High alumni, the low score didn't matter -- it was the win that counted in the traditional Valentine's Day donkey basketball game. The alumni beat the FFA basketball team, 18-9.

Though the FFA team beat the alumni last year, this year was more than payback as the alumni team dunked twice as many baskets.

Rose Queen Elisa Flores led everyone in the National Anthem, and the game began.

The teams were neck and neck throughout the first two quarters of the game. By the third quarter, the alumni pulled ahead with 8 points, while the FFA had 5.

Several alumni players struggled to get back on their donkeys once they fell off; however, they were able to get up after a few minutes of struggling.

The two referees walked around the floor, each carrying a long, thin white stick, constantly tapping the floor, attempting to keep the donkeys in a confined area.

Donkey basketball is played with five players – four players with donkeys and one center without a donkey.

One of the most central rules of donkey basketball is that if a player gets off a donkey to go after a loose ball, the player must hang on to the stirrup and take the donkey wherever they go. Sometimes the donkey begins a short gallop, and other times the donkey won't budge. In this case, the player holding onto that stirrup must stay with the donkey.

Only a couple players were stuck on the floor with stubborn donkeys. Trying to drag a stubborn donkey is like trying to move a 500-pound block of cement. 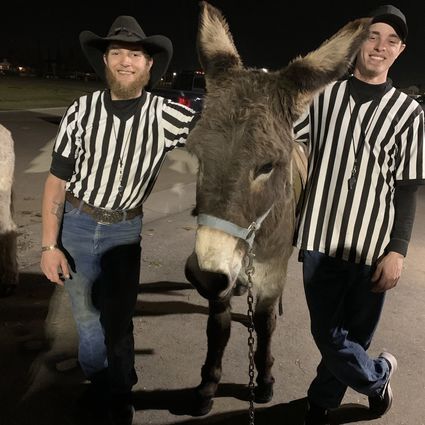 Every donkey rider wore a helmet with a buckled chinstrap to protect their head in case of a fall.

To protect the donkeys, the game is only 40 minutes long and is divided into four 10-minute quarters.

During halftime, the donkeys stay on the floor so the crowd could come check them out.

The crowd grew louder as the game neared its end, especially since the alumni were winning. But the FFA wouldn't stop cheering on their classmates.

This year's crowd was quite a bit smaller than in the past because it fell on a busy date night. "Next year, we won't schedule our game on Valentine's Day," Ag instructor Denise Morales said.