Coalition gets lesson on crime prevention 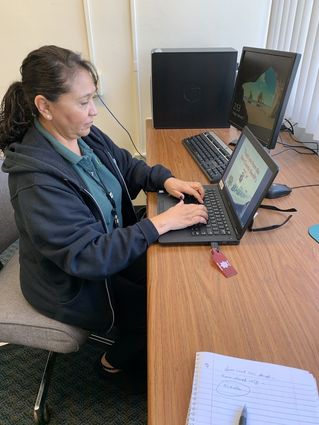 Attendees at the monthly Wasco Coalition meeting received a lesson on beating criminals at their own game.

The Kern County Sheriff's Office Crime Prevention Unit was the guest at the Feb. 5 meeting at Old Courthouse.

Crime Prevention Specialist Elvie Martinez highlighted several safeguards against criminals that often loiter around doorways, down hallways and even in business establishments. Martinez provided tips on how to make crime more difficult for the criminal.

"Cameras are always good to have," Martinez said. "Unpainted, clear front windows are also a deterrent to those thinking of robbing a business." Businesses with painted information on their plate glass windows make it easier for someone to rob the business.

Martinez also stated that some of the newer laws in California make it easier for criminals to receive lesser sentences.

In the last decade, the state has led the quest to eliminate overcrowded jails and prisons because the state was forced to lower the population of severely overcrowded prisons with legislation:

--AB 109, passed by California voters in 2011, diverts people convicted of felonies not defined as serious to local jails.

--Prop 47, passed in 2014, offers reduced penalties for some crimes such as theft, fraud and unlawful use of credit cards chargeable as misdemeanors rather than felonies.

Business and neighborhoods should create not only a neighborhood watch but also business watch groups, Martinez said. "Keep an eye out for your neighbor's house and neighboring businesses. Work together."

She listed several ways people and businesses can deter criminals. Have enough lighting surrounding the business or residence, keep landscaping low and don't use tall bushes or trees to block off the property and, of course, surveillance.

Both neighborhood watch and business watch are groups who keep an eye out for activity happening around them.

"A great way to help solve crime is by registering surveillance cameras through the sheriff's office. Once the cameras are registered, deputies can approach the business or homeowner and ask them to look through their surveillance videos on a certain day and time and report anything suspicious they might see," Martinez said.

She also said the use of social media also can be a great deterrent on crime. When people post on Facebook that a crime has occurred the area where it occurred, readers can respond.

Call 661-861-3110 to contact the nonemergency department of the Kern County Sheriff's Office.

Several groups in attendance had announcements.

--Sergeant Peter Martinez reported the probation sweep that took place on Feb. 1, 2020 resulted in 19 arrests. He also stated that more deputies have been present in town.

--Biridiana Bishop, public works director for the city, reported that recycling education is happening at the elementary schools in Wasco.

--Rob Cobb, Vice Principal of WHS reported that the new science building is almost complete and a ribbon cutting will be held once it's done.

--Richard Reding, president of the board of trustees for the WUESD, asked the community to vote yes on bonds to help with renovations and improvements for the elementary schools in town.

--Claudia Saldana from Wasco State Prison announced the annual golf tournament will be held on May 1. She can be contacted at 661-301-7122.

--Paul Hernandez of Free Will Baptist Church reported the recent homeless count was 12.

--Kaitlyn Yates from the Wonderful Company announced she is handling community grants and asked what grants the community would like.

--The Wasco Library announced that there is a free shuttle available for the Wild Wolves Preserve Festival happening March 21 and 22.

--Gina Torres from California Rail Builders, a subcontractor for the high-speed rail project, announced a community meeting on Feb. 25, 5-7:30 p.m., at the Veterans Hall on Poplar. The next major action on their schedule is demolition of the Amtrak station next month.

The next meeting of coalition will be hosted by the Orange Heart Foundation on Wednesday, March 4, at the Old Courthous