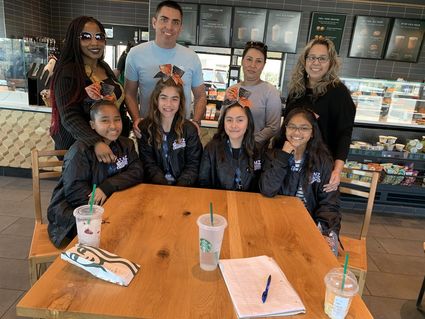 The Wasco Bengals varsity cheerleaders pulled off a difficult feat at two competitions this season.

Achieving a perfect score – meaning without error – is unlikely when it comes to competitive cheerleading. Add to this that this is the first year the Bengals have ever competed.

In October 2019, the girls took third place in the Battle of the Bleachers in Valencia.

Typically, at least one person is out of sync with the music or a stunt goes awry; however, at the Six Flags competition in November and the JAMZ Nationals, the Bengals performed two perfect routines.

The parents present were complimentary about the cheer program. Jocelyn Foots commented that the best aspect of the program was watching the girls grow. "It's exciting to see their growth from the beginning to the end," Foots said.

Veronica Arrezola stated how happy she was with what the girls had overcome and how much they accomplished.

Parents such as Jeremiah Robinson were proud to have been in attendance. "I went to every Bengals game and cheer competition," he said. All that parent Yolanda Morse could say was, "Zero deductions!"

Anissa Vasquez created the Bengals' winning routine for the JAMZ National Competition held Jan. 26 in Las Vegas. (The routine can be viewed by searching "Wasco Bengals chee at JAMZ" on Facebook.)

In preparation for the competition, Head Coach Vasquez asked the girls to watch the Netflix documentary "Cheer."

"We had five first-year cheerleaders this year," Nina Vasquez said. "There were seven eighth-grade girls, one seventh-grade and six sixth-grade cheerleaders competing. We originally started with 24 Bengal cheerleaders at the beginning of the year, but some felt it was too time consuming so they dropped out."

"I love to perform in front of people," eighth-grader Amaia Marquez said. "Proving that we could do it was great," eighth-grader Ariana Nava said. Sixth-grade Betty Morse noted that she felt comfortable with her base.

Head Varsity Coach Xina Vasquez says the girls are like her family. Xina is responsible for scheduling practices and communicating with the girls and parents, while Meagan Garza and Anissa Vasquez teach the girls their routines.

Coach Xina Vasquez said they have struggled to find a place to practice on a regular basis; however, when the weather permits, they practice at Westside Park. Occasionally, the team uses one of the school cafeterias in the WUESD when it's too hot to practice.

Another difficulty is the cost of participation. With competition entrance fees, coaches, summer camps, uniforms and travel expenses such as hotels, gas and meals, cheerleading can be expensive. 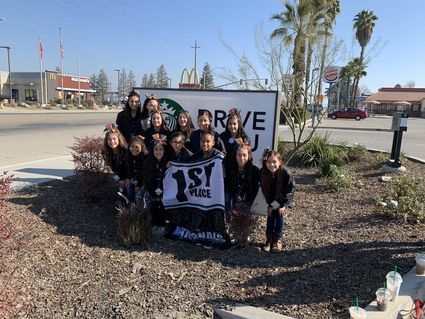 The girls posing in front of the Starbucks sign with their first-place banner.

"We have several fundraisers for all of the above, which also vary from year to year, such as a cheer-a-thon where girls get donations for a day of nonstop cheering," Vasquez said. "We also sell ad space to local businesses, football parents and cheer parents. All ads are then used for the Wasco Bengals cheer and football programs that are sold at every home football game."

The girls aren't all about competitions as was proved when they displayed their loyalty to the football team the day before Nationals. They cheered for the all-star football game in Wasco on the Saturday before traveling to Vegas for the Sunday, Jan. 26, competition.

The Bengals also hold a minicheer and football camp. "All ages are welcome to learn about cheer and football," said Coach Vasquez. "Each age group learns a cheer and performs what they've learned for parents and friends at the end of the camp." Tryouts are held on the third day of camp.

The squad is part of the nonprofit Golden Valley Empire Youth Tackle Football and Cheer Organization of Bakersfield.