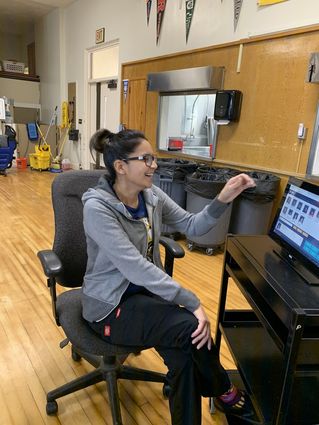 This is one in an occasional series detailing the everyday events of students in Wasco schools.

Everyone at school has his or her favorite cafeteria lunch and a not-so-favorite one. School lunches have changed more than the children of today realize.

Seven fifth-graders and eight fourth graders joined me for lunch at Clemens School on Thursday, Jan. 16. I was able to observe all the grades enjoy their lunches and how staff interacted with each other and the students.

Times have really changed. I don't remember ever having a conversation with any of my schools' lunchroom staff; however, I used to love eating lunch in the school cafeteria when I was in grade school. Their food always tasted better than home -- that's not saying much for the person who did the cooking, which was usually my sister or me.

I literally thought I had won the lottery when I entered my freshman year of high school. The selection of entrees, such as burgers, pizza and desserts was plentiful; however, my family moved to northern California during my later high school years and I ended up at a brand-new school where there was no cafeteria and we all ate outdoors. During the rain, we ended up in the hallways or sequestered in the small amphitheater. Meals were provided by vending machines, which gave us hot buttered French bread, cold sandwiches and ice cream. I don't remember if we had soda machines, but I'm pretty sure we did.

With the changes in schools over the years, there also has been a major shift in school lunches. Districts have always recognized that students need a good breakfast to begin their day and that wasn't happening back then, and schools began seeking programs to provide breakfast and lunch for those students who couldn't afford to buy a school lunch.

The WUESD lunches are provided by the Community Provisions Program, which gives each Clemens student free breakfast and lunch. Guests pay $2.75 for breakfast and $4.25 for lunch.

I remember when having bologna sandwiches and cream corn being plopped on a tray by an elderly woman with a white apron and hat. And yes, they were "plopped."

A poll of what students' favorite cafeteria food was almost unanimous: Round pepperoni pizza day is the most-popular lunch, while pizza sticks were the most unpopular item served.

A close second in popularity was a cheeseburger, and yet for others it was the least-popular meal. A couple of students love the spaghetti; most of the students didn't like the barbecue pulled pork sandwich.

"My favorite lunch is the round pizza," fourth-grader Hailey Crawford said. "My least favorite is the pulled pork sandwich." Fifth-grader Zenaida Amador said that the orange chicken was her favorite, and she didn't like the pizza sticks.

A couple of the transitional kindergarten and kindergarten students were excited about having orange chicken for lunch and said it as their favorite.

Jenkins stated that the district department is composed of 48 employees and six school sites. "Each site cooks and prepares meals in-house for all students," he said. "We feed an average of 3,000 lunch meals and 1,000 breakfast meals and 400 snacks daily districtwide."

"WUESD is able to provide free meals to all the students in our district for breakfast, lunch and snacks through CPE Provisions," Jenkins said. "This money is available from the federal government, and the WUESD is looking into starting a supper program for all students attending after-school activities." She said this could happen before the school year end.

Jenkins added that students must eat their meal at school and can only take one or two items home, such as a piece of fruit.

"Also, the district just began working with the Waste Hunger Not Food Campaign organized by the Kern County Health Department. With this program, the district is able to donate leftover food to participating local churches in Wasco. The current churches receiving donated foods are New Generation (Monday and Friday) and Canyon Hills (Wednesday).

Food Services Assistant Leticia Granados tapped a photograph on her computer screen as each K-4 student's photo appeared to verify that student had a lunch that day. The students greeted her by name, and she even took a short time out to help a little girl tie her shoes before tapping on the next student's photo.

Granados does the same procedure for breakfast for the K-4 students as well. "It took me about two months to learn who each student was," she said. "Once lunch is over and I have a student's picture still up on my desktop, I ask the other students whether or not child was in school that day. We want to make sure everyone gets a healthy meal. 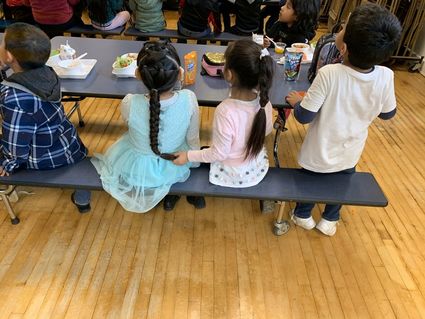 I paid $4.50 for my orange chicken lunch, and I thought it was very tasty, with just the right amount of crunch to each bite. Each piece of chicken had plenty of flavor. I also had some green salad but declined the orange slices. I did grab a bag of carrots to take with me for an afternoon snack and drank low-fat chocolate milk.

I want to compliment the chef and let everyone know Clemens' Assistant Principal Jan Hummel, the students and the cafeteria staff created a positive experience with terrific lunchtime company and good cafeteria food. I observed a lot of genuine warmth and caring for each other during the meal.