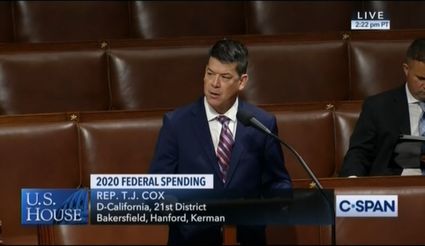 Rep. TJ Cox introduced an amendment to the Department of Defense appropriations bill for the fiscal year of 2019 that increased research on post-traumatic stress disorder, and the congressman said that he was letting veterans know that people care and that they are standing up every day Americans and veterans.

Rep. Cox is proud that not only was his amendment adopted in an overwhelming bipartisan vote, but also included in the final bill, that will be sent to the president for his signature.

Recently, the House of Representatives passed a pair of key Fiscal Year 2020 funding bills, also called "minibus bills." Cox has been very active in this process, fighting for Central Valley priorities often ignored in the funding process. Without legislative action to authorize necessary operating expenses, the government was set to shut down on Dec. 20. A shutdown would have resulted in a freeze in military pay, critical health and safety programs across the country being halted, and billions of dollars in lost revenue from the economy.

This bill funds numerous crucial projects, and fills the critical funding needs for those who serve. In June, Cox introduced the amendment to the appropriations bill that increased research for post- traumatic stress disorder among the brave Americans who served our nation, by $10 million.

"Our nation's veterans and their families have sacrificed everything for our country and freedom. We cannot let them fall through the cracks – that's why my amendment was so critical," said Cox. "Additional research is needed to better understand post-traumatic stress disorder and help clinicians provide adequate treatment to patients before symptoms become chronic. My amendment which is in the final bill, heading to the president's desk, will invest an additional $10 million to help inform our health professionals on how they can best treat our servicemembers and communities across our nation who have been diagnosed with a traumatic brain injury, post-traumatic stress disorder, and psychological health conditions."