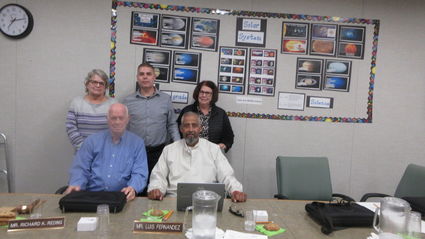 Wasco schools are in good financial shape, according the latest report of budget revisions.

The report represents revised projections through the remainder of the fiscal year ending in June, Chief Business Officer Karen Evans told the WUESD board Tuesday night.

"The district is able to certify its first Interim Report as 'positive,' meaning all financial obligations for current and two subsequent fiscal years will be met," Evans said.

"Staff certified that WUESD can meet its obligations for the current fiscal year and the two subsequent years," Evans added.

In other action, the board selected Richard Reding as the 2020 board president and Anna Poggi as clerk, while board members Luis Fernandez, Danny Rueda and Cherylee Wegman are trustee representatives.

Additionally, Superintendent Kelly Richers also discussed the bond measure – Measure C -- that will be on the next ballot.

Richers stated that this $16-million bond will be used to improve safety and the quality of the schools. "Most of our schools are old," Richers added. "We want to replace temporary portables with fixed classrooms, renovate all the schools by modernizing classrooms. and improve the safety of our schools."

He added that there are three phases in the measure

2021. $5 million will be spent for the new athletic fields at Forrest and Palm Avenue.

2023. $5 million to replace the portables at Prueitt and Palm Avenue schools.

2026. $5.4 million to an alternative school and the master kitchen.

Richers also reported to the board that Internal Business Accountant Kay Espitia has submitted her retirement request, and the district has hired Rosa Hernandez as a new special education aide at Forrest Elementary.