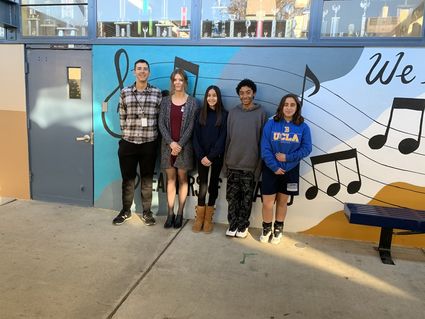 A new word was created this year at the Kern County Leadership Conference, which included student body officers from local school districts.

At the Leadership Conference held in October 2019, the schools were given three options or projects they could choose from: Jamison Center, Bakersfield Homeless Shelter or local animal shelters.

The TJ students chose to put together a program that would benefit the Bakersfield Homeless Shelter. Along with their advisor Jose Solis and physical education teacher Drew Raney, the students decided to hold a canned food drive to begin their Kidsgiving project.

"We chose this project because it created a bigger impact and involved more people," Raney said.

The student council began collecting items for their project right after the leadership conference.

Solis stated that his desire is to change the school's culture by having the students give back to the community. He wants the public to understand that the school is going under a change and that change is to benefit the local community.

The students at TJ take part in a leadership class for 30 minutes every day, Solis explained.

Not only were the students involved in the canned drive competition, but the teachers were also involved. The winning classroom won a pizza party, while the winning teacher got movie tickets, lunch at Café 101 or a gift card to Starbucks

The teachers were as excited about the contest as the students were. Both groups brought canned goods, clothing, food and children's toys -- enough to fill 10 large boxes.

"We will be dropping off the boxes at the homeless shelter sometime this week," Solis said.