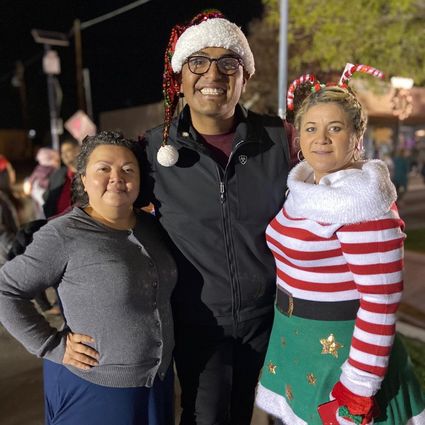 Enjoying the parade were from left Ana Vigil, Alex Garcia and Orquidea Ocampo.

Wasco opened December – and the holiday season -- with its Christmas parade.

The third annual Christmas parade was held Dec. 2 and 7th Street was lined with people waiting to see the magic of Christmas unfurl before their eyes.

This was the third year the Downtown Business Association has sponsored the Christmas parade. People began arriving to pick their favorite viewing spot an hour before the parade started.

Many of the local shops had wreaths on their doors, while others remained open for those customers wishing to pick up a little something last minute.

Attendees wandered from one end of 7th Street to the other. where the Christmas tree was officially lit after the parade was over. 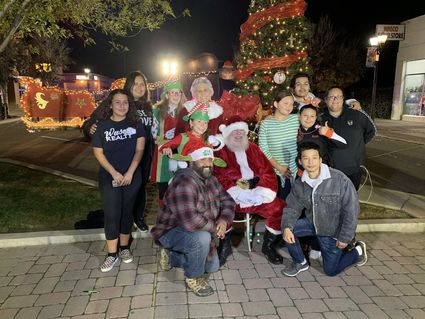 Members of the Downtown Business Association, Mr. and Mrs. Claus and some elves took a break from the hustle and bustle on 7th Street.

The holiday spirit was prevalent as many wished others around them a Merry Christmas. The crowd focused on the brightly lit floats as they swept by. Excited young children were spotted running around enjoying the colorful displays of lights. Many parents thought ahead and brought something warm to drink.

According to Reyna, the adults and kids lining the parade route were enthusiastic as they cheered and shouted, "Hi Santa!" and "Merry Christmas" as Santa's sled passed by.

As the school bands marched by, the crowd offered loud applause with cheers.

At the end of the parade, the crowd began moving toward the Christmas tree for the official lighting, led by Santa. Many families lined up to take pictures with Santa, Mrs. Claus and the elves. "There were lots of happy kids and lots of smiles," Reyna added.