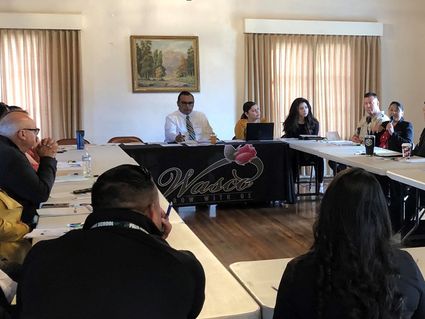 At the beginning of his term last December, Garcia stated that he wanted to get speakers together to address mental health and the census, as well as safety information, in order to come up with information that could be passed on to residents.

Public Safety was addressed at the beginning of the discussion with Crime Prevention Specialist Evie Martinez of the KCSO followed by Senior Deputy Steve Vasquez from the Wasco substation talking about improving community relations within neighborhoods.

Vasquez said that deputies are continuing their efforts on improving community relations within neighborhoods. He brought up Proposition 4, "The Safe Neighborhoods Schools Act."

This proposition made three changes to felony sentencing laws. First, it reclassified certain theft and drug-possession offenses from felonies to misdemeanors. Second, it allows certain defendants serving sentences for felonies that have been changed to misdemeanors to file for resentencing under the new provisions and third, it authorizes new misdemeanor provisions.

If a person is sentenced for a felony that has been changed to a misdemeanor and they have completed their sentence, they may apply to change their felony conviction to reclassify it to a misdemeanor.

The next area of discussion was behavioral health and recovery, presented by Noe Escobar.

"We have about 00 different programs serving recovery all the time," Escobar said. "We provide services to adults, adolescents and children.

Flood Ministries specializes in reaching out to the most- vulnerable homeless, who are often unable to get the help they need on their own.

Flood Ministries also offers a Rural Motel Voucher Program, which makes available limited funds for emergency temporary lodging to qualified families and individuals who are currently experiencing or are at risk of experiencing homelessnesss.

Escobar also mentioned that Kern Behavioral Health has 1,000 employees and they are currently trying to revamp their system by hiring more people to meet the state's requirements.

In addition to Escobar, mental health advocate Jackie Rubalcava provided an update on available mental health services in Kern County and Wasco, now and in the future.

Rubalcava provided a brochure from the support group La Clave that outlined mental illness symptoms. The organization, based at the University of Southern California, can be contacted at 213-821-5234. "We need to support the people instead of judging them," Rubalcava said.

The final discussion centered on the upcoming 2020 census. The message focused on the theme "Everyone Counts," Regional Campaign Manager Cristina Camacho said.

"For the first time, the census will be done online," she added. "There will be a postcard arriving in the mail in March 2020 followed by three more reminders, and if a response is not made by April 30, someone will come knocking at your door to conduct the census for your family." 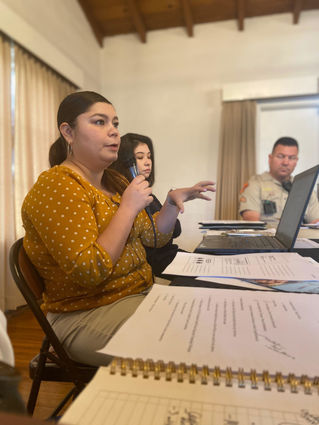 Camacho reminded everyone that every person counts because the more people counted means more federal money for programs for the community.

Camacho also stated that often people forget to count their children. "In the last census, 1 million children were not counted."

In order to get the message out, she said that teachers can educate their students about the census and students can go home and educate their parents. "Census equals money," Camacho said.

Kern Complete County Committee's Karmeena Morales stated that the census committee needs more workers. She can be reached at 855-506-2020.