Homes for comeback from tough loss against Shafter in rivalry game 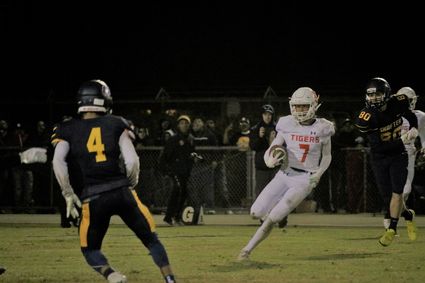 Andre Cordova with the carry against Shafter.

In the 93rd installment of one of the longest and fiercest rivalries in the county, the Shafter Generals held off a late charge by the Wasco Tigers Friday night and won bragging rights for the year with a 28-21 victory.

But that doesn't mean the end for Wasco this year. They'll play the Arvin Bears on Saturday in the first round of the Division 4 Valley championships.

The Generals have now won the "Big Game" two years in a row, with the latest game allowing the Generals to claim a share of the South Sequoia League title – and a spot in the Valley playoffs.

Wasco ends the season even across the board, 5-5 overall and 3-3 in the SSL.

The Tigers started Friday night on a dominant note when the junior varsity team from Wasco dismantled the Colonels by a score of 52-7.

The Tigers won the toss at the beginning of the game and elected to receive. Wasco wasted no time in asserting itself early when they scored on their first possession after a long drive that ate up the first six minutes of the quarter. The Generals answered right back with a good drive of their own, ending with an 8-yard touchdown score by quarterback Jackson Sanchez.

In what looked like was going to be a high-scoring battle, the Tigers retook the lead with a touchdown pass completion that gave them a 14-7 lead.

Such as in a heavyweight title bout, these two teams took turns punching each other, with Shafter with a jab to tie the score 14-14 when Sanchez scored again, this time from three yards out.

With only a few minutes left in the half, the Generals took their first lead of the game with a 62-yard touchdown pass from Sanchez to Felix Chacon, giving the locals a 21-14 halftime lead. Shafter scored first in the second half when Elijah Lucero took the ball in from the 25 yard line. 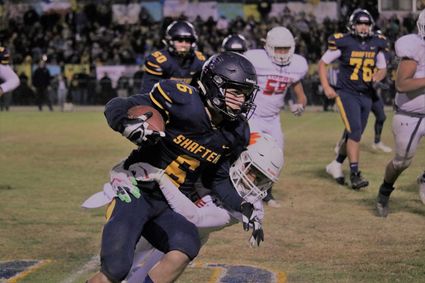 Shafter had a couple of opportunities to put the game away, but their offense lost a couple of fumbles in their own territory. The Tigers narrowed the gap to 28-21 with a touchdown pass. But Shafter took the onside kick and ate up the clock.

Letting their rivals end the regular season with a win is the highlight of the season, even if neither team is in the playoff hunt. But this year, both teams were in the thick of the league race.

With the win, Shafter will at least share the SSL title. They have one loss, and that is to the Titans of Chavez, who beat Shafter three weeks ago.

The Tigers were seeded #5 in Division 4, and the game at Arvin starts at 7:30 on Saturday.