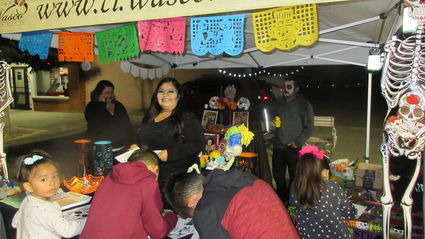 The City of Wasco's booth entertained children with coloring books.

Día de los Muertos (Day of the Dead) is a holiday celebrated throughout Mexico and by people of Mexican heritage. It's a day to recognize, honor and give love to lost relatives. Often, families create an altar in their home and place photos and offerings (things the deceased may have loved in life) on it. Legend has it that on Nov. 1, if a deceased loved one's photograph is placed on the altar or hung above it, that loved one can come back to visit the living family members.

The street and sidewalks were swarming with revelers wearing colorful costumes with heavy skeletal face painting, eating and swaying to the beat of the music. It was party time in downtown Wasco.

There were many food choices for different palates to pick from, including tacos, burritos, quesadillas and ice cream. Cookies by Karen was open past closing time to serve those wanting a cupcake or cookie. OutKast Catering was also present to offer its special tacos, burritos and other Mexican food items. A new addition to the list of food vendors was Wings, which served a long line their assortment of flavored wings.

Orange Heart Foundation members were available in the beer garden all evening and worked closely with the two bartenders Alfredo Sanchez and Carlos Gutierrez. IDs were checked at the door to make sure everyone was of legal age to imbibe.

Attendees enjoyed the variety of booths available. One new vendor this year was Independent Stylist Bernice Wickham who was selling Colorstreet Crafty Nails.

"The concept is brand new," Wickham said. "I've been in the business for about a year and the nails are put on like Band-Aids. The nail polish strips come in an easy one-step application for a manicure within minutes. Anyone can do his or her own nails in one easy step." 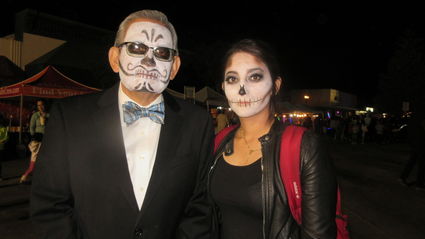 The nails are advertised as 100% real nail polish strips.

Esperanza Melendez is the owner of Regalos Noyedades, a toy vendor with moving dolls, ducks, airplanes and vehicles that smaller kids could play with. Visitors circled this vendor's booth to watch the toys move around the asphalt. The toys sold for $20 each.

Downtown Business Association Vice President Camilo Vasquez addressed everyone before the music began. He thanked sponsors such as Sunnygem, Orange Heart Foundation and Supervisor David Couch, who helped the DBA put on this event and all the committee members who worked tirelessly.