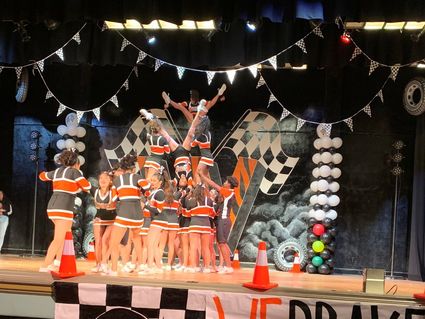 Tiger cheerleaders show their ability to tumble during lifts.

Traditionally, the exchange rallies are not only noisy, but often tense with mounting pressure before the evening's game.

This year, the game was held at Shafter High. It was the last game to be played on the current field, since it will be undergoing a complete renovation within the next year.

Activities and Athletic Director for Shafter, Brian Feaster, asked the schools not to boo when cheerleaders came to the floor; however, an occasional boo could be heard.

Typically, the opposing side is assigned a very small portion of the seating in the rival school's gym or auditorium. This year, Wasco's rally was held in the auditorium and the opposing seating section was blocked off by crepe paper. No one dared step onto the opposing side's territory, and everyone respected the boundary.

The walls, balcony and doorways were decorated with checkered flags like those seen in automobile racing. Black and white checkered signs and balloons could be seen throughout the room.

The Shafter cheerleaders performed for the crowd, followed by the Tigers' performance. Finally, the mascots danced. 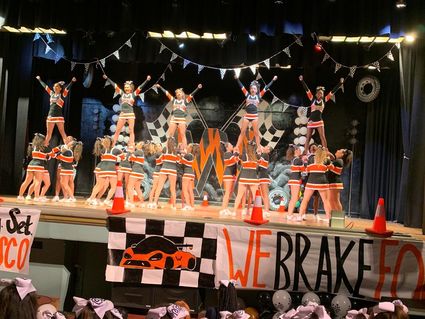 The Tigers are able to lift several cheerleaders.

Both schools shared a video presentation. Shafter had a "Star Wars" theme and, with their newly donated sound and video equipment, if felt like an actual movie theater with surround sound. Their video also included special effects.

In comparison, Wasco offered two videos and a slide presentation. The first video was a spinoff of the movie "Groundhog Day" and the second video incorporated this year's racing theme. Senior football player Matthew Robledo was the lead character in the "Groundhog Day" film.

Wasco's players entered the auditorium via the tunnel onto a foggy floor. Each player was introduced and shook the hand of their opposition.

Everyone left the exchange rallies with high spirits, ready for the game.