A week of rivalry

Wasco gears up with evening rally 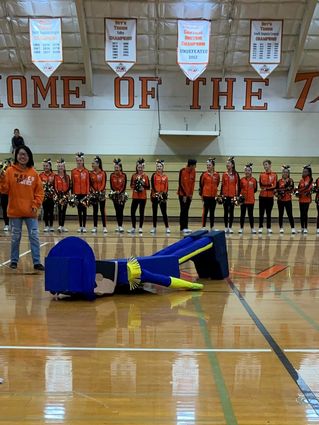 The decline of the General begins.

Last week, the Wasco Tigers held the traditional Wednesday night rally in preparation for the Shafter vs. Wasco rivalry game.

On Friday evening, November 1, the Wasco Tigers made their way to the Generals' turf. Earlier that morning, the Tigers traveled to Shafter to share in a joint breakfast.

After breakfast, an exchange rally was held at Shafter High.

Spirits were high and tensioned rivalry could be felt as the Tigers entered the Generals' gym. Spirited music was heard streaming out of the gymnasium. Games were played and cheerleaders led the crowd in loud chants.

Following that, both groups traveled to Wasco for the second exchange rally which concluded the morning's activities.

As the crowd filed into the gym, students could be seen in the middle of the floor using gentle strokes to shave balloons with shaving cream. 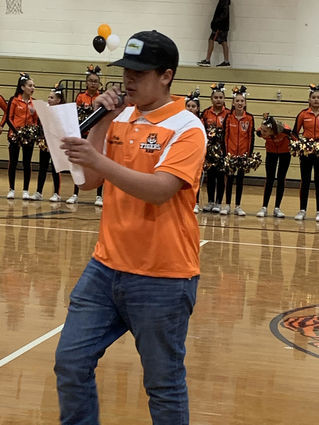 ASB Community Representative Ricky Carriedo was the announcer for the rally.

When Coach Chad Martinez walked to the center of the room and called the players to join him on the floor, the crowd went wild with cheers and whistles for their favorite players. No one in particular was singled out with louder yells; every player was greeted with the same decibel of noise as they ran onto the court.

Martinez's message to the players was one of pride and support for the Tiger team.

Once the General was brought to the middle of the floor, the Wasco crowd screamed enthusiastically for the General to be beaten.

And beat the General, they did. The football team decimated the paper mache mascot to bits and pieces.

Once the General was down, the gym emptied quickly.

"We didn't have the bonfire on the field because of the wind advisory," Principal Kevin Tallon said.