Tigers could knock Shafter out of SSL title race 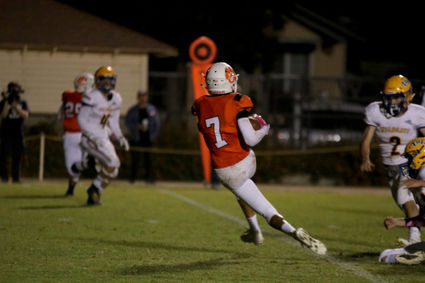 Andre Cordova with the catch scoring in a Tiger touchdown against Taft.

The Wasco Tigers hosted their last home game of the season last Friday night against Taft, and they left the field a winner.

Taft was the first to receive, and they were driving down the field. They were in the red zone before the ball was coughed up and recovered by Joel Vargas. But the Tigers couldn’t capitalize. This brought the game to the second quarter with the game still scoreless.

The next drive for Taft also stalled, and the Tigers were back with the ball. They drove down the field,chipping away with runs. This was until Jacob Villenueva threw a 16-yard strike down the field to Andre Cordova for the first touchdown of the game.

But Taft would answer right back, making the score 7-6, with a minute left in the half. The Tigers drove down the field with the purpose of one more touchdown before the half. Set up by a long 38-yard connection between Villanueva and Cordova, Villenueva found Cordova In the end zone once again, this time for 12 yard reception, putting the Tigers up 14 -6 to end the half.

To start the second half, the Tigers took the kickoff and came out ready for another 24 minutes of war. They drove down the field and ended with an 8-yard touchdown from running back Christian Alvarez. Making it 21-6 in the third quarter.

Both teams kept fighting for the ball, until deep into the 4th quarter the Tigers struck again. This one was a long run once again by Alvarez for a 34-yard touchdown, making it 28-6 with 1:47 left in the game.

Taft scored one more time late in the game for the final score.

The player of the game goes to running back Christian Alvarez, who rushed for 174 yards on 18 carries with 2 rushing touchdowns. The play of the game went to the fumble recovery by Joel Vargas, which set the tone for the Tigers game on Friday night. 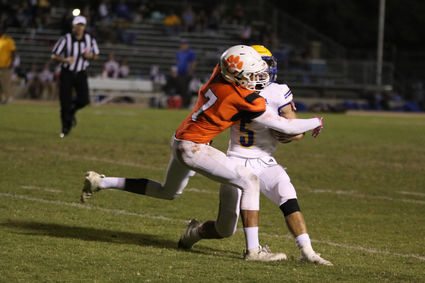 Andre Cordova with the tackle against Taft.

In the preliminary matches, the junior varsity won 44-6 over Taft, and the freshman lost 47-30 against independence on Thursday.

It is that time of the year again. It is time for the biggest local rivalry and that is Shafter vs. Wasco. The junior varsity begins at 5 p.m. Friday at the Shafter High football field, and the varsity at 7:30. Come out and root for Wasco!!!

The Tigers, now 3-2 in the South Sequoia League and 5-4 overall, have a chance to knock the Generals out of the league championship – and the Valley playoffs. The Generals are at 4-1 in SSL action, and can clinch a piece of the championship with a win in the rivalry game. Chavez and Kennedy join Shafter at the top of the standings, with 4-1 records.

The community is invited to join in the citywide rally on Wednesday at the high school at 7 p.m.