For senior couple, so close, yet so far 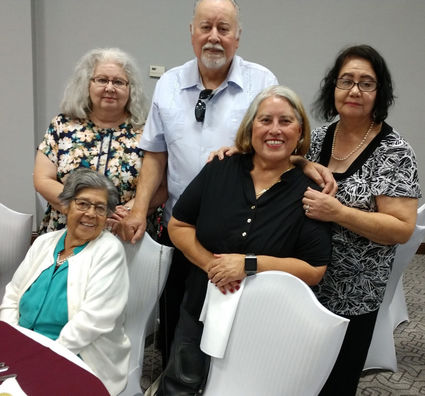 When 72-year-old Serafin Ybarra, Jr. spotted 61-year-old Maria R. Villegas at St. John's Catholic Church during Mass one Sunday, he knew he had to meet her.

This is not a story of young love, but a story of mature love between two widowed adults who both had been single for many years.

Ybarra lost his wife to brain cancer eight years ago when he was 64, and Villegas lost her husband in a car accident 32 years ago.

The first time Ybarra asked Villegas out for coffee, she had to decline because she was headed out of town to visit her daughter.

When they saw each other again in church, he asked her out for coffee again, and she said yes. For them, the rest is history. The two have been inseparable since that cup of coffee and were married on Oct. 19 in a Mass at St. John's.

Their wedding reception was held at K & R Banquet Hall in town.

They were both shocked when they realized they lived a few doors away from each other on the same street. Understandably, Ybarra was always at work while Villegas was busy raising her children at home. "I used to see her with her kids," Ybarra said. "But I never saw any husband."

Both were born in Mexico; however, Ybarra's mother was Caucasian and his father was Hispanic, while both of Villegas's parents were Hispanic. Consequently, Ybarra was able to speak English and Spanish, while Villegas only spoke Spanish.

Ybarra was educated in Arizona and worked in the fields with his father during school vacations. His family moved to Wasco when he was 20 years old. While working, he experienced the closure of several companies, including Jackson Perkins Roses, Harry and David, and Rancher's Cotton Oil.

"I've picked cotton all day Saturday and Sunday, [and] driven tractors and cotton machines during my career," Ybarra said. 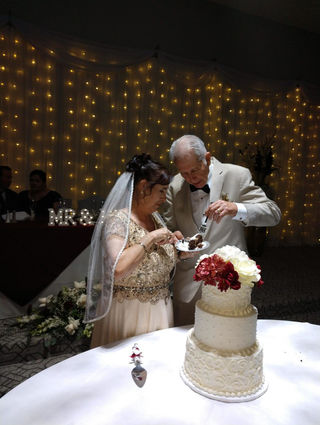 The bride and groom cut the cake.

Ybarra didn't have much time to relax and vacation; however, he and Villegas are now thinking of taking a trip to Hawaii and Mexico. While he's never been to Hawaii, Villegas raved about its beauty and how much she loved the weather over there.

There is no talk of relocating because they both love living in Wasco.

"In bigger cities, everything is rush, rush," Ybarra said. "That's one reason I love living in Wasco, because it's still small enough to know almost everyone."

The two of them enjoy playing cards, board games and Dominoes together or with friends and family.

With Ybarra only recently retiring, he is enjoying the idea of joining Villegas' large family with his. Villegas has six adult children and 12 grandchildren, with one on the way, and Ybarra has two children and two grandchildren. Both are heavily invested in their families and look forward to a new life together.