Fans come out In Tiger pink 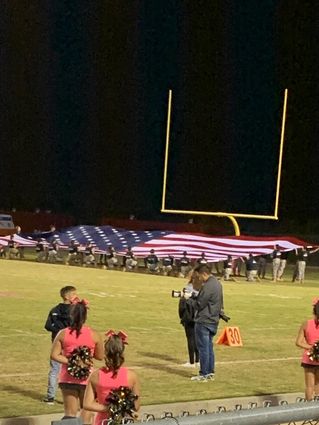 Arvin High School brought out a large American flag at the beginning of the game.

The game between the Arvin Bears and the Wasco Tigers was a quick one, over before 10 p.m. on Friday night. And it was put away long before that.

They met on the Bears' field, but the Tigers played the field as if they owned it.

Before the game began, the announcer asked that all attendees currently serving in the military or who had served in the military stand up and be recognized for their patriotism.

In addition, the bleachers on both sides of the field weren't equally filled, as the Tigers' attendance numbers increased in size as the game played on. There were several gaps in the Arvin bleachers. 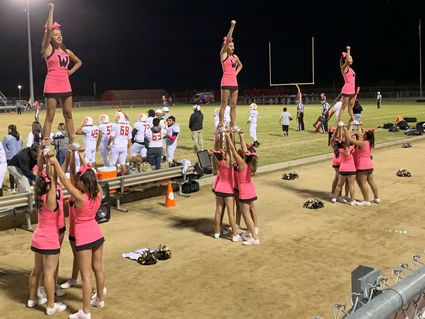 Tiger cheerleaders show one of their many lifts.

No more hot summer nights where no sweater is needed in the valley; instead, warm jackets were needed by attendees at the game.

The Tiger cheerleaders were colorful in pink uniforms, with each girl sporting a large pink bow. Many in the stands also had on the large pink bows.

The cheerleaders' uniforms were pink, and they were wearing large pink bows in their hair

In front of the stands, Muhammad and fellow classmates delivered spirit for the fighting Tigers. Muhammad led the group with everyone following his lead.

The Arvin Crimson Bear Band and their color guard played at halftime.

At the end of the third quarter, the Tigers were ahead 28-0 under a running clock (no timeouts).