City celebrates a festival – and more 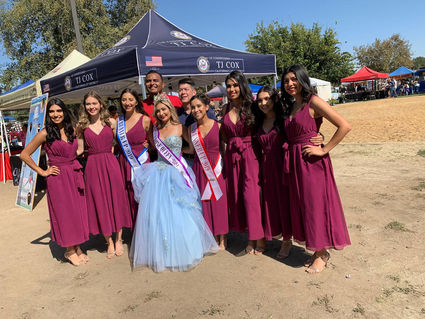 Congressman TJ Cox was surrounded by 2019 Wasco Rose Queen Elisa Flores, her court and Mayor Alex Garcia in front of his booth at the festival.

The second part of this year's Wasco Festival kicked off Saturday morning in downtown Wasco, with floats, marching bands, motor vehicles of all sorts and sizes, horses, and even a mule.

The parade on Saturday included groups from several local groups such as the elementary school district bands, high school band, churches, equestrian groups, floats and a lot of walkers.

Onlookers lined the parade route from D Street to 7th to Poplar, finishing at Barker Park, where the festival was already underway.

Grand Marshals Ken and Tina Newman rode through the parade in a buggy drawn by a mule The crowd got a big laugh watching the mule. "The donkey was funny," young Jose Garcia said.

2019 Rose Queen Elisa Flores and her court rode on a shiny float.

Also riding close to the beginning of the parade were Grand Marshals Danny and Petra Rueda in the Rueda's vehicle.

The Glennville rodeo queens on their horses were highlighted by one with roses around its neck, while another had a small drape of colorful flowers.

In the middle of the parade, several members of the City Council rode in Engine #1, greeting and waving to the crowded sidewalks.

Once the parade was over, it was time to head for Barker Park for the festival and car show.

The car show officially began at 11 a.m., and VFW member Danny Rueda was ready for the crowds. As he sat at the entrance to the car show, he greeted many by name and said hello to those he didn't know, which weren't very many.

The cars were in pristine shape, many refurbished by the owners, and others purchased already refurbished.

Joe and Pascuala Gaitan drove to the car show in their 1982 Buick Regal. "I've been doing car shows for 18 years," Joe said. "I refurbished this car myself."

He stated that the car had the original motor, but he overhauled the engine. "I do drive this in town," he added.

There were several Ford Mustangs among the group of cars.

Barker Park was jam-packed with food choices. Wherever one turned, a place to purchase either a beverage or food or even a snack such as caramel corn, creamed corn in a bowl, tri-tip sandwiches, water or sodas, Mexican food and a variety of flavored Sno-Cones.

Some of the activities included face painting, bean bag toss (cornhole) and booths with a large selection of toys and goodies that would appeal to children. 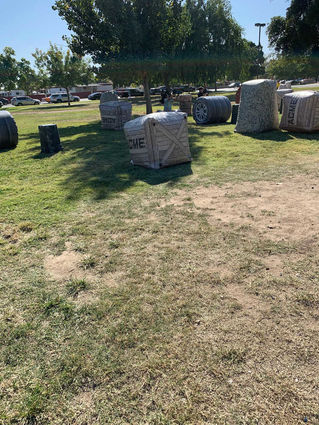 Laser Tag was a popular game for many.

In addition, one of the returning shops was selling brightly colored dresses and shirts.

Another popular area of entertainment was where the DJ was playing popular tunes. He also offered karaoke for anyone who dared to sing in front of a crowd of festival attendees.

Another addition to the festival this year was ESports, Smash Ultimate, the video game competition that was featured at Pizza Factory in 2018.

"Our business has really grown a lot," because of the competition, said one of the four owners, Eric Munoz.

On the way out of the park, the last game spotted was laser tag, where kids were pointed laser guns within the laser tag area in the hopes of tagging someone and be declared the winner.