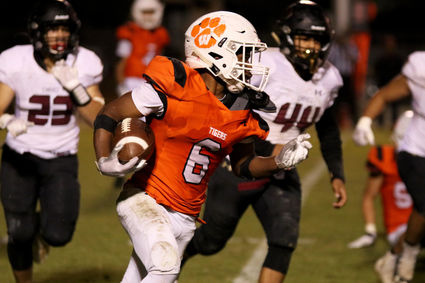 Chavez was the first to get on the board with a short sweep by the quarterback around the left side. That put the score at Chavez 7, Wasco 0.

The next drive for the Tigers stalled, and the Titans were back with the ball. On that drive there is a fumble recovery for the Tigers, but wait, the play was called back on a penalty by the Tigers for too many men on the field, leading to another touchdown for the Titans, making it 13-0 after a nixxed extra point attempt.

The Tigers were not out, though. On the next drive, Jacob Villenueva threw a dime down the field to Andre Cordorva for a 38-yard reception to put the Tigers on the 5-yard line. Just a few plays later, Villenueva hit Cordova in the corner of the endzone, cutting the margin to 13-7.

On the next drive, the Tigers made a big fourth-down stop to give the offense a chance to go into half with the lead.

On this drive, Villenueva and Cordova connected once again down the field to put the Tigers in the red zone. But the Titans made a stop right before half and headed into halftime 13-7. The Titans would come out and strike first again in the second half. That put the score at 19-7 in the beginning of the 3rd quarter.

But the Tigers answered right back with another connection between Villenueva and Cordova, as Cordova out-jumped a defender in the endzone for a Tiger touchdown, making it 19-14 headed into final quarter. 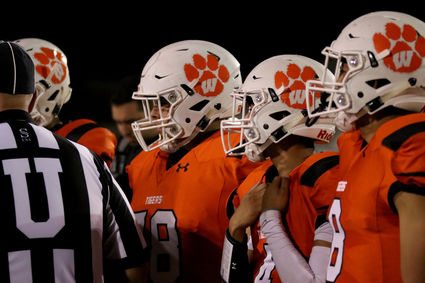 The fourth quarter was all about defense, as both teams fought over possession of the ball. The Titans drove down the field, until a critical fumble recovery by Chris Garza for the Tigers. It was now the Tigers’ turn to drive for the win with just a few minutes left in the game.

But on that drive, there was a mess up on the handle for the Tigers and Chavez recovered. Chavez would then move down the field and score to put the game away for the Titans. The Tigers lose a tough one to Cesar Chavez.

The player of the game was Andre Cordova for 156 receiving yards on 8 catches. Cordova also had the play of the game with a catch in the endzone over a defender.

For the preliminary game, the junior varsity kept their undefeated win streak as they won, 43-14. The freshman team fell to Chavez.

The Tigers travel to Arvin this Friday, with the JV game starting at 5 p.m. and the varsity at 7:30.