There's a 'good neighbor' in town 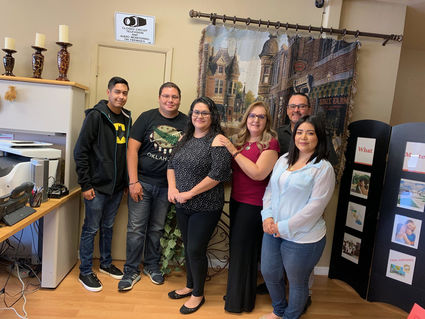 Ramos' agency maintains a high level of loyalty to the city of Wasco and a commitment to customer satisfaction. They're one of Wasco's long-time fixtures in the downtown business community.

Prior to State Farm, Ramos was an elementary and middle school teacher. She studied and was credentialed at Ovalle Gaudny in Mexico.

After Ramos married Oscar in Mexico, they relocated to Port Hueneme, where she worked in a State Farm office and trained to become an agent.

"While working in the southern California State Farm office, they asked me to relocate and take over the Wasco State Farm office after the former agent retired," Ramos said. "We didn't know anything about Wasco." She now calls Wasco her favorite place. "I would not want to move back to Mexico. I love small communities."

Ramos stated that she would never go back to teaching again because she loves what she is involved in now. "I love my agency," she said. They have four agents in the office.

Ramos has experienced some frustration with the number of break-ins her office has had. "We've had three break-ins since I've been here," she said. "The first and second ones, nothing was taken; however, the last time they broke in through a small window, jumped on and broke two desks and broke into a desk drawer looking for money." The intruder got $1,000 in the third robbery.

They were able to provide surveillance footage to the Wasco substation, and the suspects were eventually caught. They have now hired a new alarm company.

Ruth's support for other small businesses in Wasco has led to long-lasting friendships. In June 2019, Ramos hosted an ice cream social at Paleteria y Nieveria Las Michoacanas #2, located on 7th Street. The event was open to the public so everyone could enjoy their ice cream. "This is just one way I can show my gratitude to my downtown neighbors," Ramos said.

On May 21, the couple opened K&R Banquet Halls, an event space with banquet halls that are available for special occasions.

They both manage the banquet halls, but she handles the reservations and makes the necessary arrangements.