New Cakes by Karen, and a young owner 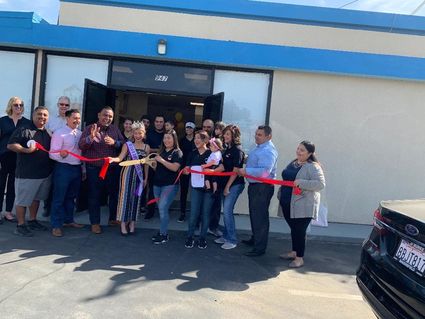 The ribbon cutting ceremony with city staff and the owner's family.

A new bakery opened up in Wasco on Tuesday morning.

While the location might seem all too familiar, the owner of the shop is new. Cakes by Karen is located where Sweet 7th Street Cupcakes and Cookies was located.

At 11 a.m. sharp on Tuesday, Oct. 8, Cakes by Karen officially opened its doors to the public.

The parking lot was filled with eager new customers, family and friends waiting for the ribbon cutting to commence so they could go into the shop.

She and her family were up all night baking and wrapping and getting ready.

Cabrera, 26, is a young woman with an entrepreneurial spirit. She had a good idea of what she wanted to do when she graduated from Wasco High.

"I knew I wanted to bake," Cabrera said. "I've been baking for friends and family for years."

Cabrera is a graduate of the Culinary Institute of Sacramento, a two-year program that only took her 18 months to complete. "I was determined and driven to finish the course so I could get back home to my family," she added

After graduation from institute she applied for positons as a baker at several Bakersfield establishments. "I went in with my portfolio to show them what I've created," she said. "But, I wasn't hired. It wasn't meant to be."

Mayor Alex Garcia praised Cabrera for being a young owner and following her dream of opening up a business in Wasco. "I knew this was what I wanted to do since high school," Cabrera said.

Cabrera uses Instagram to display many of the cakes and cupcakes she has created, and may go further on social media. "I don't have a Facebook account, but I'm thinking I should get one to advertise," she said.

"The first decorated cake I made was when a friend of mine wanted a special birthday cake for a friend who was turning 18," Cabrera said. "She wanted a cake with makeup decorations on it. I made it, and she said I should go into business." This led her to opening her own shop much earlier than she expected.

Cabrera started by doing cakes at home, and now that she is married, "I have two ovens and three refrigerators at home," she said.

Some of the goodies Cabrera will be offering will be cookies, cupcakes, brownies and Rice Krispy treats. She loves baking cakes, but isn't sure how much she will charge.

"Pricing for cakes is more difficult than it is for cookies or cupcakes because it depends on how big you want the cake and how much decorating you ask for," Cabrera explained.

She doesn't want the business to become strictly a telephone business, because she says that meeting with the customer face to face is always better and you can discuss exactly what the customer wants. "I ask them to bring in a picture of what they want when they call me," she said.

Also, Cabrera receives a lot of help from her husband, Peter, who is the manager of La Costa Mariscos Restaurant on Stockdale Highway, as well as her mother and mother in law.

Prices at Cakes by Karen are expected to run from 75 center for a pastry to $3 for a decorated and filled cupcakes. Her cake and cupcake flavors will be chocolate chip, vanilla, marble, red velvet, lemon, funfetti, strawberry and carrot.

She is looking forward to getting her first cake order and meeting with the customer to decide exactly what they want. "My cake servings start at $3 a slice," she said. 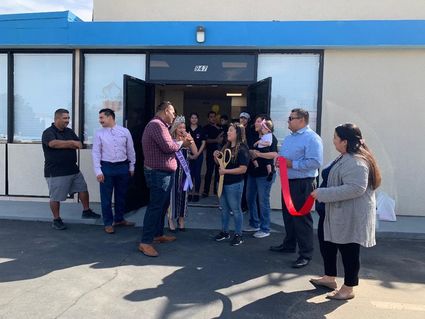 Some of the changes that Cabrera is making include putting in a telephone line directly to the shop, adding signage to the building and eliminating any customer seating area where people can drop in and eat what they buy. "The customers will come in and pick up what they want and take them home," Cabrera said.

In an interview with Cabrera after the ribbon cutting, she exclaimed that they had sold out of everything within an hour of opening the doors.

At 12:30 that afternoon, there were only empty shelves and husband Peter Cabrera was emptying a cookie jar of the remaining few cookies.

"We will have more by 4 o'clock," Cabrera said.