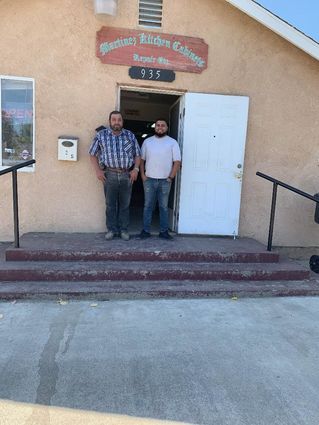 The first few years are the toughest for a small business, but some are able to make their mark and thrive.

Martinez Kitchen Cabinets at 935 Poso Dr. is just one of the more successful family-owned businesses that have been around for over five years.

When customers enter the shop – if you look hard enough, you can tell the building was originally an old church -- they are greeted by the smell of fresh sawdust and freshly cut wood.

Martinez has Junior greet the customers in English, while he tackles the business aspect (measuring and cost calculations) of each job.

Martinez was born in Jalisco, Mexico, and arrived in Delano in 1979. He is a former field worker who has been able to achieve the American dream of owning his own business.

After a long day working in the fields, Martinez would come home and immediately head to their garage, where he would work on woodworking projects, Junior says.

"My father would work in the fields all day," Junior said. "Then, he would come home and go to the garage, where he would work on wood projects."

Even though Junior was born in Delano, he was raised in Wasco and attended all Wasco schools. He enjoys running into old friends while he works on jobs.

Junior and his wife have settled in Wasco, too.

"I have my own home in Wasco," he said. "And I just got married in April. We haven't done any remodeling yet, but maybe in the future. My dad remodeled his kitchen himself, and it took him several years."

"We self-advertise," Junior added. "We have customers from all over, such as Santa Monica and even an old customer from Wasco who now lives in Oklahoma. When he is in town, he will come see what we have."

Junior stated that the business focus is on custom cabinet work. Several pieces of their work were on display inside the shop. "We use a store-bought base coat, then we mix our own colors for stain."

A chest of drawers frame was waiting to be finished as the completed drawers were drying a few feet away, stained a medium brown with a hint of red.

The size of the shop is deceiving because it is broken up into several different sections. The main section is usually what the customer sees when they walk into the building – a room full of raw material, thus the smell of newly cut wood and sawdust. In the back is a room, where stain is mixed to create their own unique colors, and still another section utilized for projects ready to load onto their trailer. 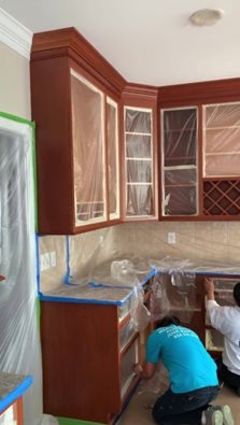 The creation of a kitchen cabinet.

Father, son and mother, Irma Martinez, all get to know their customers well. All three are involved in all the projects taken in until completion.

Junior stated that there is very little wasted wood. "We use everything we have," he said. In fact,on a recent tour the only small piece of visible waste was a narrow piece of wood about eight inches long.

In addition, "We give away free sawdust to anyone who wants it," Junior said.

The family runs a clean, friendly shop, and they eager to engage in friendly conversation as customers enter.

"We get to know everybody's story," Junior said. "People from the fields come into the shop to visit or to do business."