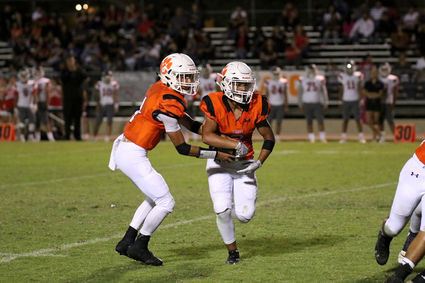 Quarterback Jacob Villanueva hands off the ball to running back Christian Alvarez. (Photo by Severiano Anaya)

The Wasco High Tigers came out with complete fire on Friday night in their home game against McFarland, 48-21, in their first game of the South Sequoia League season.

Leading the team was star running back Christian Alvarez, with 212 yards and four touchdowns. Rodrick Scott was not far behind him, rushing 139 yards and gaining two touchdowns. 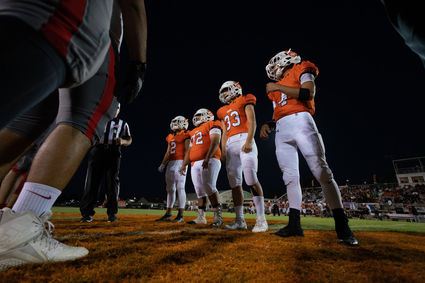 The team captains head to the middle of the field for the coin toss. (Photo by Danny Eusabio)

There was also a great passing connection between the quarterback, Jacob Villanueva, and Sean Sharp, resulting in another six points for the Tigers.

On the other side of the ball, the Tigers had two big interceptions by Alejandro Prieto and Julius Manzano (#10). These big plays kept the ball in Wasco's possession, which helped them control the ball and continue to be a powerhouse running team.

This Friday night, the Tigers go up against Delano on the road at 7:30 p.m. Junior varsity action starts at 5 p.m.