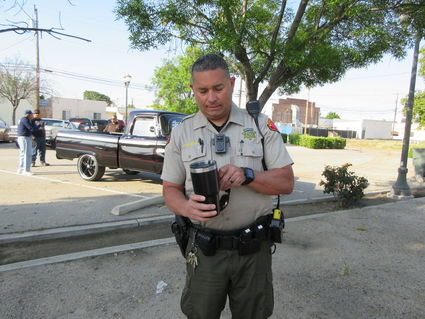 Deputy Patrick Basquez during one of the recent cleanups.

The local coordinator of the Sheriff's Activities League described some of the important benefits of joining SAL at the Wasco Woman's Club's September meeting.

Deputy Patrick Basquez, the SAL coordinator in the Wasco substation, told the group about what SAL does to aid the community.

"SAL is a program that teaches leadership, responsibility and helps create productive citizens by preventing juvenile delinquency, crime and disrespect," he emphasized.

"At the present time, we have 126 members registered at the Wasco SAL," Basquez said. He described some of the annual fundraisers SAL holds, such as the fishing derby, which is usually in March but will be in February in 2020, a countywide SAL barbecue held in Bakersfield at L and 22nd Street, and an annual golf tournament, which is held in November.

"We expose them to museums and other special places," he said. "These are all bonding trips. Another great trip we've taken is to the Getty Museum."

"The SAL kids work hard, and we celebrate by taking them on special trips," Basquez said. "We've gone to Magic Mountain, the coast and hiking." Basquez added that some of the kids had never been to the coast before, and the SAL trip was their first visit to the beach.

SAL kids are well-known for their efforts in working community cleanups, held a couple of times a year. "We need adults to take leadership positions on the cleanups, whereby they can guide the kids during their cleaning efforts," he added.

In addition, Basquez mentioned the boxing program offered by SAL and said there were several SAL kids enjoying the sport. "Twenty-four have signed up from Wasco," he said.

Basquez told the club members SAL is in need of volunteers for the program in several areas, such as community clean ups and after-school programs.

He mentioned that Wasco High School Principal Kevin Tallon will have the football players and cheerleaders helping out with this year's fall cleanup. "The kids are divided into small groups, and each group is given a specific section to clean up (pick up trash, call for large item pickups and general maintenance of an area," he said. "We usually have them start in alleyway sections. We need adult leaders to lead these groups of kids." 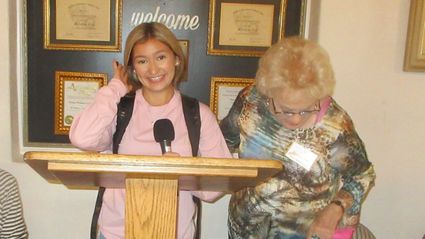 "Every kid involved in the SAL program has to be enrolled in school," Basquez added. "I worked with a student who had dropped out of school, but participated in the program over the summer."

He said that the student re-enrolled in school to be able to participate in the program.