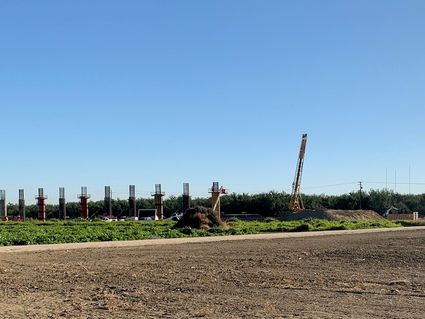 Effects on Amtrak passengers and its Wasco station, and the still-to-be-determined location of a maintenance yard, highlighted the California High-Speed Rail Authority's update meeting last week at the Wasco Veterans Hall.

California voters approved the HSR in the 2008 election, which at that time was budgeted for $40 billion. However, Gov. Gavin Newsom stated in a February address that it could cost anywhere from $77 billion to $100 billion, and until the state budgets more money for the project, the only portion that could be completed is the Merced-to-Bakersfield section running through Wasco and Shafter. Construction continues on this proposed 178-mile portion in the valley.

Diana Gomez, Central Valley regional director of the California High-Speed Rail Authority, presented an overview of the progress on the construction to date. "We have all the funding to build from Bakersfield to Merced," Gomez said. She showed a video of the Central Valley construction and said that around Labor Day weekend, the HSR had over 3,000 workers on site. "80-90% are from the Central Valley," she emphasized.

Antonio Canete, who represents California RR Builders LLC, the contractor building the 21-mile segment between the Kern County line and Poplar Avenue, showed photographs and explained the construction on that segment. He anticipated completion of the segment in 2021.

A question was raised about the "deplorable" state of the Wasco Amtrak station and how HSR was going to handle Amtrak passengers during construction.

Canete said the Amtrak station would be demolished, but that a platform would be maintained. Once construction of the HSR roadbed begins in the City of Wasco, a "shoofly" would be built to carry the BNSF Railroad around the area of construction, and the platform would then be relocated. Once the high-speed rail is completed, the BNSF would return to its original right of way and a tunnel would be put in to allow pedestrians to access the platform for Amtrak trains.

The City of Wasco is working with the HSR on a plan for Amtrak passengers, and input is welcome, officials said. If Amtrak patrons find the area in poor condition, they should lodge their complaints with the California RR Builders office just north of town. 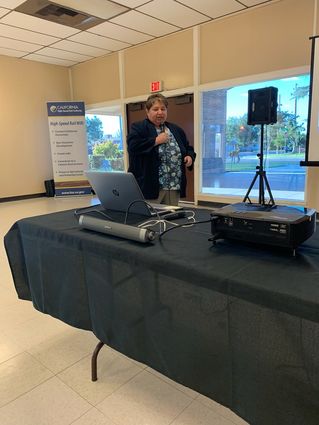 Gomez stated that stations are planned for Merced, Fresno, Hanford and Bakersfield. "There will not be a station in Shafter or Wasco, although it is expected that Amtrak will continue to serve Wasco." In response to an inquiry, Gomez said, the maintenance yard site "hasn't been determined yet."

Resident Petra Rueda suggested to Gomez that since the migrant housing was relocated, that space would be an ideal spot for a maintenance yard.

Then, attendee Vince Martinez asked Gomez if the HSR had done a ridership plan on this model. Gomez replied, "Yes, it would be available in the 2018 report; however, it has not been added to the updated report."

"At our next meeting, we will focus on the Amtrak station and the undercrossings in Wasco at Poso Avenue and Highway 46 and what they will look like," Gomez said.