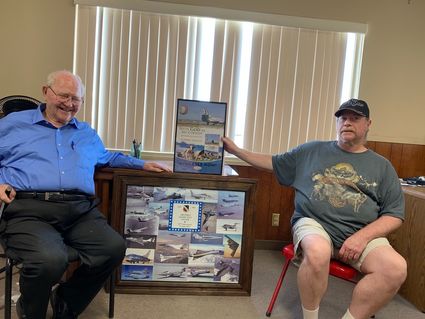 From left, Alfred Miller and his son, Charles, show a display from his recent book publishing.

The Wasco Festival has added a newcomer to its line of events.

Alfred F. Miller has been added to the lineup of talent at this year's Wasco Festival, where he will be selling his book From Cows to Space with God as My Copilot: My Career and Family Life.

Born and raised in Wasco, the 89-year-old Miller attended Wasco schools and graduated from Wasco High in 1948. Immediately after high school, he went to the University of California at Berkeley, graduating with a bachelor of science degree in mathematics and statistics in 1953.

Miller started out on a dairy farm in Wasco and describes how he had a front-row seat in the right place at the right time to witness the unsung heroes who worked in flight testing. He was part of the test personnel that made the space industry what it is today.

He managed the Flight Test Center, as well as many NASA X-Planes at the Armstrong Flight Research Center. He is also considered one of the "fathers" of the Utah Test and Training Range, which was established for cruise missile testing and Air Force combat training.

"I never flew," Miller admitted. "I worked behind the scenes to provide all the flight test support needed. I worked in research and development and often evaluated what occurred at the AFFTC."

Miller added that he always had the intention of writing a book, but after a medical experience, felt that it was finally the time to begin writing. He started his book when he was 88, just a year ago. He also added that it's been 50 years since the Apollo Mission, and it was "just time."

Miller and his wife share eight children – four boys and four girls – in that order. They celebrated their 67th wedding anniversary this year.

Miller brags about his wife, saying that she is not only brave, but very strong. His wife, Dorothy (Worley) Miller, raised all eight children and is also a Wasco High graduate and former high school valedictorian. Dorothy went back to school at California State University, Bakersfield and became a registered nurse. "She did this throughout raising the children," Miller added. "She is a very determined and focused woman."

Miller retired in 1991 and keeps busy with his family. They have family reunions almost every year, and to Miller, family is everything.

Alfred will have a table at the Wasco Festival on Saturday, Oct. 12, signing his books for the public.