A tree of life 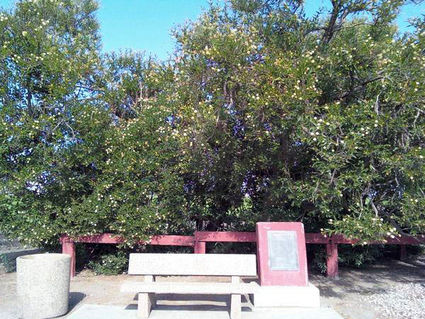 This Buttonwillow Tree is the namesake of the town.

The names are familiar: Banducci, Antongiavani. Tracy. Selvidge. Houchin. Ghilarducci. These are all names forever entwined with the town of Buttonwillow. Shafter's sister to the west has not changed much in the last 50 years, either in population or economically. They have a rich tradition of farming, which is the town's mainstay and offers employment to most.

When visiting Buttonwillow, you must check out the tree that the town of Buttonwillow was named after. Now a historical landmark, this button bush was a meeting place for the Yokut Indians. This is where hunts were planned and rites observed by the Yokut indians. In later years, stockmen used the Buttonwillow Tree as a rendezvous spot along a transvalley trail.

The original town site was first laid out in 1895 and was proposed to name the town Buena Vista. The land was bought by the Miller-Lux Co., and they established their ranch subheadquarters and store in the vicinity of the tree. The town had a population of 1,508 in 2010, and it is about the same today, at 1,680.

The farmers, for years, were wallowing in a gold mine, with rich soil, great for crops such as cotton, alfalfa and vegetables, such as carrots and beets. Water was plentiful at the time, but with the dry years not letting up, Buttonwillow, like the rest of the county, had to its strategy.

A lot of the farming families turned their attention to grapes, almond orchards and other nonrow crops. There are also a good number of cattle in the area, raised for market and for show. Buttonwillow is also the home of Raceway Park, that attracts racers from all over the country. The track was built 20 years ago by the Sports Car Club of America. They hold several racing events throughout the racing season, Even in the off-season, the track is busy almost every weekend with teams using it as a testing facility.

Buttonwillow recently celebrated its annual Fall Festival. There were food booths, games and rides, as well as a car show that featured over 100 cars from classics to hot rods. There was also a parade, in which Mayor Mario Delfino, Grand Marshals Albert and Sharon Ghilarducci, and a host of entries including bands, horses, tractors, classic cars, were on display.

Without having a municipal government, Buttonwillow still manages to keep their town moving forward and prospering. There are activities for the kids, with an outstanding Little League program and Babe Ruth, There is also a pool and lighted tennis courts.

A big park sits at the edge of town, complete with the ball fields, playgrounds and the pool.

Buttonwillow also has a unique way of picking their "leader." They hold a dinner and auction, with the person selling the most tickets for the event being named Honorary Mayor of Buttonwillow. This year, it is Delfino.

The town also has an abundance of riches at its fingertips for those who love nature. Within 20 minutes, there is the Tule Elk Reserve, which is home to one of the largest collection of elk in California, as well as Buena Vista Lake, for those who want to fish, swim or water ski. It has a variety of activities that you can participate in.

Three miles east of Buttonwillow is Interstate 5. There are plenty of places to eat and get gas, along with a collection of motels and convenience stores. Asked what was special about Buttonwillow, Manuel Labana said that "it is just a great place to live. People are friendly, it is clean, the school is good, and it is within distance of a bunch of things to do." 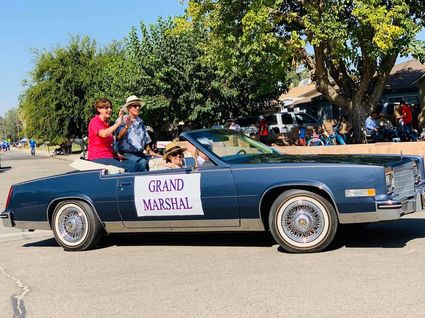 Grand Marshals Albert and Sharon Ghilarducci wave to the crowd.

The same sentiments were spoken by employees at the Buttonwillow Market at the interstate. Jessica Moreno took time out from her shift for a picture, saying, "You need to see the Buttonwillow Tree, that is a must."