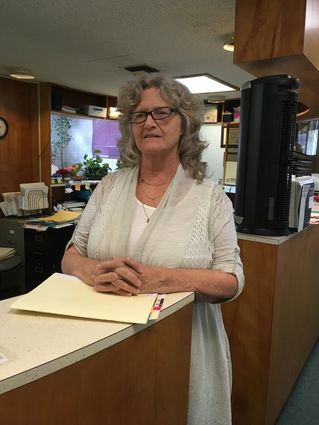 Carol Hamilton goes over some paperwork on the counter in her office.

When Carol Funk Hamilton lived in Santa Barbara, a car accident that caused her a lot of pain and suffering also gave her the incentive to become a chiropractor.

"I went to a chiropractor over there, and he healed me," Hamilton said. "That's when I made up my mind to become a chiropractor."

Hamilton also took martial arts classes when she was younger. Between the classes and the chiropractor's help, her mind was made up to become a chiropractor and help others. "The chiropractor put me back together," she said.

Hamilton was born and raised in Wasco. She attended all Wasco schools from K-12 until she went away to college at University of California, Santa Cruz. "It was a much quieter place than UC Berkeley," she said. "The college was much mellower than other campuses."

As a young newlywed living in Santa Barbara, she took on whatever jobs were available at the time – clerical, warehouse, etc. "I did whatever I had to do to survive," she said.

She added that she worked for temporary agencies until she was hired part time and then full time in the Santa Barbara County Sheriff's office as a correctional officer. "Back then, women were called 'matrons' in the prison system. That was when the equal pay law was passed and women received the same pay as men," she added.

When Carol and her husband looked in Wasco for housing 20 years ago, the pickings were very lean. She ended up buying a place in Rosedale, and continues to live there.

Waiting in Hamilton's outer office on a recent day was Wasco resident and community volunteer Janet Grundt. "I've been coming here since she opened her practice," Grundt said. "We've known each other since grammar school." 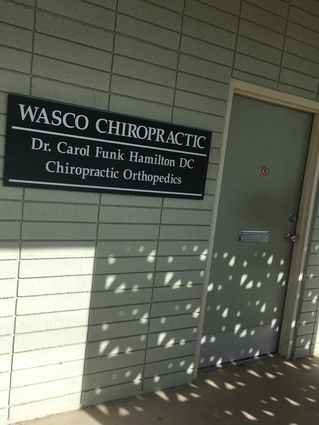 The outside of Carol Hamilton's chiropractic office.

In addition to being a chiropractor, Hamilton is also a counselor, including people at Riverlakes Church in Bakersfield. "I would eventually like to spend more time counseling people," Hamilton said. "I volunteer at Riverlakes, and it has a great counseling program." Hamilton does a lot of Christian counseling whenever time allows.

"I'm very active in Community Bible Study in Shafter at Valley Bible Church," Hamilton said. "They allow me to counsel there."

Hamilton shared that she has a 28-year-old son who is a computer expert working out of Bakersfield.

She is actively involved in the Wasco Rotary, as well as the Wasco Junior Woman's Club.

Hamilton has a long bucket list that she wants to complete before too long. "I would love to travel and retire in, say, five years," she stated.

A highlight for Hamilton was a 1980s scuba diving trip she and her husband took in Maui.