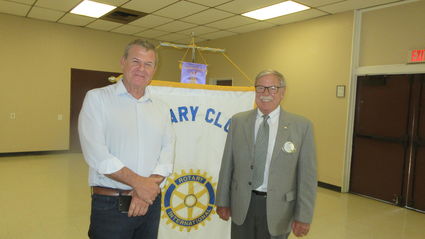 Price was introduced by Rotary member Larry Pennell as a veteran journalist who has worked for the Californian as editor, author, columnist and writer for over 31 years.

Price said he is impressed with the fact that Wasco High School students can walk through graduation with an associate's degree from Bakersfield College on graduation day.

"Education is important," he said.

He then launched into his perspective of the future of print journalism. "Most people today get their news from their cell phone," Price said. He added that those who refuse to tap into the digital age are only hurting themselves and will be behind in what's happening."

Price feels that print journalism is a struggling industry. He sees the conflict as journalists wanting to give back to their communities by reporting the news that people want to hear; however, "It's a business, and the bottom line is the dollar and how many ads are sold," Price said.

He also touched on the digital economy and stated that those not invested in the digital age will be left behind.

With the instant access provided by the electronic media, print journalism won't be able to keep up.

When people open up their newspaper, they usually go to the obituary page first. "These are now our subscribers."

He then launched into another opinion regarding Kern County's economy. "We are an oil and agriculture state," he said.

He added that when he reads or hears about environmental groups attempting to get rid of the oil industry, he understands that it will change everything about California's economy. He questioned where California will go in the future.

"It's what we have depended on for years in Kern County," Price said.

"The government has allocated $1.5 million for a study from University of California to get rid of the oil industry. Kern County without oil will have more poverty than it does now."

Price then brought up the recent sale of the Californian and stated the new owners are from British Columbia.

"When the Californian was being sold, I tried to get a group of people together who I knew could purchase the paper, but they declined to invest in print journalism," Price said. "Luckily, we were able to keep our core people."

"We want to keep costs down as well as continue to publish."

Price also talked about the second edition of his book, "The Bakersfield Sound."

He described the book as a labor of love. "I grew up on rock and roll music," he said. "One of my earlier jobs at the paper was entertainment, and that is where I became familiar with the 'Bakersfield Sound.'"

He was able to develop a friendship with Buck Owens, and the two of them would get together and talk music. "In 1997, I started out with four Sunday articles on the "Bakersfield Sound," Price said. "I met Buck Owens then, and we became friends. The paper tries to keep the 'Bakersfield Sound' alive today."

Price said the Bakersfield Chamber is incorporating the idea into their new slogan: "Bakersfield -- The sound of something better."