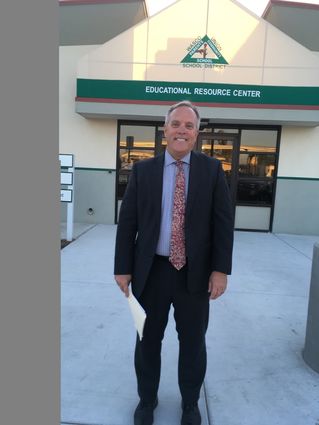 Rex Despain gave a presentation on a bond feasibility study conducted by telephone.

The Wasco Union Elementary School District is once again looking into placing another bond on the ballot.

The district is considering making classroom and school facility improvements and putting a school improvement bond measure before voters on an upcoming ballot.

Rex Despain of Isom Advisors, a division of Urban Features, Inc., presented the results of the study to the board members at its Tuesday meeting.

"The support for a bond is above the Prop. 39 -- 55% level," Despain, who prepared the report, said. "A survey was conducted from Monday, August 19, through Friday, August 23, to determine whether or not there was support."

He said that were 279 voters contacted by telephone calls on a proposed measure. There are 7,116 registered voters in the district, he explained.

The district wants to improve the quality of education, modernize or construct classrooms, restrooms and school facilities by replacing portables with permanent classrooms, and making health, safety and security improvements.

The district is looking into $14.7 million in bonds with interest rates that would pay bondholders an average of $907,000 annually as long as the bonds are outstanding. The cost per homeowner would be $30 per $100,000 assessed value.

Superintendent Kelly Richers clarified that the bond would not go toward salaries, and all the money would stay in Wasco.

Ultimately, the bond projects would include

The study showed that more than 55% of those who answered the survey questions would be in favor passing the bond measure.

According to the study, all projects tested received over 80% voter support. Voters were supportive of tax rates for each of the individual projects, and support was above the necessary 55% voter approval needed.

Despain recommended that the district consider placing a bond measure on the March 2020 ballot.

He also indicated that the majority of voters believe education in the district is headed in the right direction. 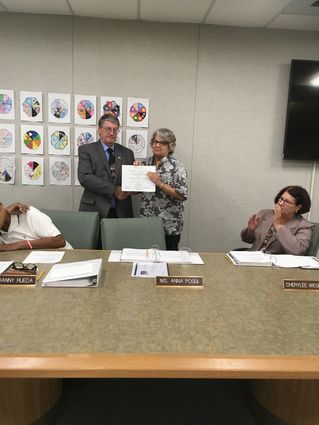 Board member Anna Poggi was recognized for five years of service on the school board.

"We need to go out and gather more information," Richers said. "We have a few months in which to explore this issue with the voters."

In other school news at the meeting, Briana Aguilar had a change in assignment to Thomas Jefferson for 2.5 hours daily, and Monica Jimenez and Suleyna Visoso were both hired at Palm Avenue for 3.5 hours daily each.

Superintendent Richers presented board members Luis Fernandez and Anna Poggi with commendations congratulating them for five years of service as school board members.