Night of stars for 10 young women 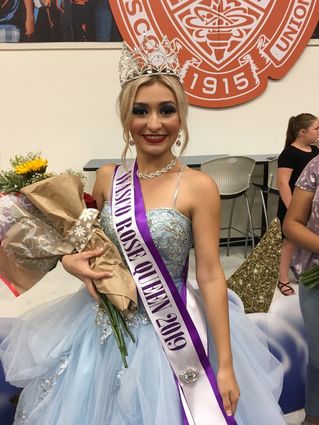 The audience erupted into a loud roar of approval accompanied by whistles and clapping last Thursday night when Elisa Flores was named 2019 Wasco Rose Queen,

Pageant emcee Ally Triolo introduced Elisa, from the stage of the Wasco High School auditorium, ending a night of entertainment and months of hard work by the 10 contestants, all students at Wasco High School.

In addition, Elisa took home three scholarships; $200 for the physical fitness portion of the pageant (presented by Wasco Festival featured artist Shirrel Sanford and her late husband, John), $400 for the talent portion (Peters Funeral Home) and $1,000 for being crowned the Rose Queen.

Elisa, sponsored by the Wasco Woman's Club, shined throughout the pageant, performing a roping routine to a popular country tune for her talent portion.

The second runner up, Haylee Nunez, sponsored by the VFW, received a $600 scholarship (California Home Pro; Tilo and Jen Cortez). Haylee also walked away with an additional $500 scholarship for obtaining the scholastic award (Wasco Bengals) for the evening. She showcased her talent by reciting a humorous monologue about a trip to Disneyland.

Sihomara Navarro walked away as the first runner up and received an $800 scholarship (CSI Construction). She shared some of her culture by performing an Aztec dance for her talent enhanced by wearing a colorful feathered headpiece and bright beaded dress.

The pageant theme of "Ready, Set, Blast Off!" was apparent in the stage decorations, with stars gleaming on the ceiling and walls as the girls were paraded through the stage wearing their formal ball gowns.

Additionally, many of the dance routines were choreographed to space-theme tunes. 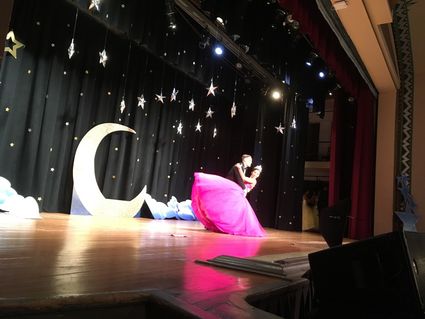 The talent portion of the pageant included 2018 Rose Queen Victoria Bernal in a number of enthusiastic fast-paced dance routines. Bernal's presence was spotted throughout the pageant. The 2019 contestants displayed their utmost respect for their former queen.

Prior to the announcement of the queen and her runners up, 2018 Rose Queen Victoria Bernal gave an emotional, personal statement thanking everyone for their help during her reign and expressly thanked her hometown for allowing her to be its queen.

The pageant atmosphere was one of a close bonding experience. "Queen Elisa mentioned that the girls all worked together as a cohesive group. "If one girl's routine was great, every girls' routine had to be the same – great," Elisa Flores said.

The queen and her court greeted guests in the cafeteria, where a brief reception was held.