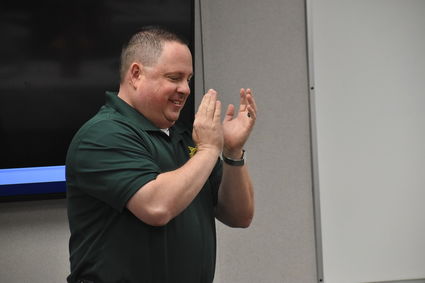 The Wasco Community Coalition monthly meeting was hosted by the Wasco State Prison on last week, with a crowd gathered to see a presentation and network with other business owners and community members.

Breakfast was served and afterwards, there was a presentation given by staff members of the Wasco State Prison. Officers in the Contraband Unit, as well as the K-9 Unit, were on hand to describe their duties and what accomplishments they have attained.

The K-9 Unit has the two top-rated dogs in the state of California. The dogs travel from prison to prison, going wherever needed for investigations. The canines are trained to find the four major drugs: heroin, meth, cocaine and marijuana. Officer Rodriguez said a new trend in the contraband game is causing a rash of overdoses. A dangerous synthetic drug, fentanyl, is responsible for the majority of overdoses in prison and on the streets, according to law enforcement sources.

Rodriguez said an overdose can result without ever even ingesting the drug; just a couple of airborne granules inhaled into your system can cause an overdose. Fentanyl is 50 to 100 times more potent than morphine. The crowd was told of two instances in the last 24 hours in which inmates at the prison had overdosed on fentanyl but were able to be revived with naloxone.

It was pointed out that recently a dog in the K-9 Unit detected a batch of fentanyl and overdosed due to exposure to the drug. Fortunately, the dog was brought back with naloxone.

It was asked how long a dog can serve in a unit. Officers responded that they can serve as long as they are physically able to. It all depends on the animal and its breed. They have had dogs who have been retired after just a few years of service, and others who serve much longer, such as one dog that recently retired after 12 years.

After their retirement, the handlers are given an opportunity to take the animals home and keep them as personal pets once their service is done. Rodriguez said that the majority of handlers take the animals when they retire and provide them with a good life. 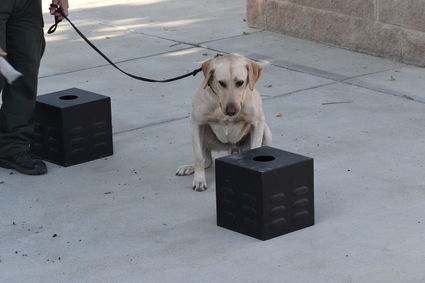 This highly trained canine sniffs out a cell phone in a demonstration.

A display of over one hundred weapons was at the presentation, giving attendees a look at what kind of contraband is confiscated by officers. One of the officers said the number of items found in a certain time period depends a lot on the current politics within the prison. "If a group of prisoners is having a beef with another, or one section of the population is having a hard time with another one, the manufacturing of weapons can increase, and the danger of violent encounters becomes a possibility."

He said they always have to keep their eyes and ears open as they go through the different sections of the yard, not only watching for outbreaks of violence, but also the rumblings of impending trouble.

Another hot topic at the meeting was the upcoming Rose Pageant and the Wasco Festival that will take place in October. On October 12, the city will celebrate the second half of the Wasco festivities with a parade, a car show, a variety of activities at Barker Park, and a Music Festival at the Babe Ruth Field, starting at 5 p.m. Musical guests at this year's festival will be Mento Beru, a popular Bakersfield band with a big following throughout Kern County, and Maxwell's Fireball Express.