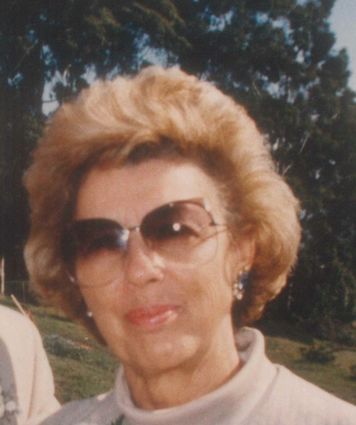 Roma McCaffrey's parents were Woods Stone and Martha Buller, the first couple to be married in Shafter. She attended Maple School and Wasco High School, graduating in 1940. Her education continued with two years at Bakersfield College and two years at the University of California, Berkeley, where she was editor of the school paper. After graduation in 1944, she married Howard "Bud" Russell, and they began farming in Pond.

After his passing in 1953, she moved to Wasco, continued farming, and married Murray "Rocky" Rockwell in a 1956. They raised lots of crops and two sons, Bob and Steve. After Rocky's passing in 1981, Roma loved running the farm and was a savvy but charming businesswoman. Her 1987 marriage to Tom McCaffrey was an unexpected gift which lasted until his passing in 2003. She enjoyed playing bridge, reading and doing crossword puzzles. She was a loving, intelligent and strong.

Roma was preceded in death by her husbands, parents and sisters Venona Bergen and Virginia Rorick. She is survived by her sons Bob and Steve Rockwell, granddaughter Hannah Rockwell, stepchildren Lynn, Cathy and Tom and their spouses, children and grandchildren, and her nieces and nephews and their families.

We are deeply grateful to Roma's loving caregivers from Around the Clock.

Viewing will be Thursday, Sept. 5, at Peters Funeral Home in Wasco from 4 to 8 p.m. A service will be at the funeral home chapel on Friday, Sept. 6, at 10 a.m. followed by burial at Wasco Memorial Park. In lieu of flowers, donations may be made to SPCA, 3000 Gibson St., Bakersfield 93308.