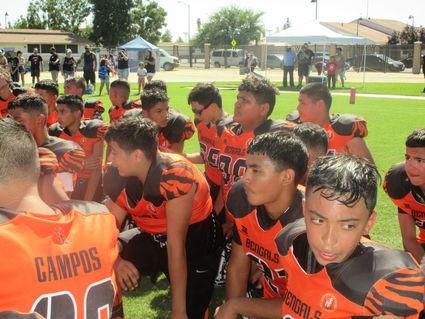 Team huddle at the end of the game.

Saturday was opening day for the Wasco Bengals, and it was a winner. The final score was Bengals 44, Southern Ravens 0.

With a lot of fanfare, both teams' players were individually introduced to the spectators. 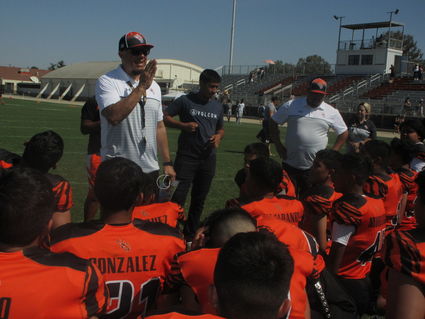 Coach Bernal talks to the team after the game.

While most people were watching the game, smaller ones were running and playing on the bleachers.

Cheers were constant on the Bengals side as they played a high-scoring game with a lot of action on the field.

"I can't believe they are playing in this heat," Michael Villalpondo, Sr. said.

The Bengals are set to play Central Bakersfield (a feeder program for Bakersfield High School) on Saturday at GEF Kaiser Permanente Stadium, 9001 Ashe Road. Game times are 9 a.m. for freshman, 11 a.m. for sophomores, 1 p.m. for JV and 3 p.m. for varsity.