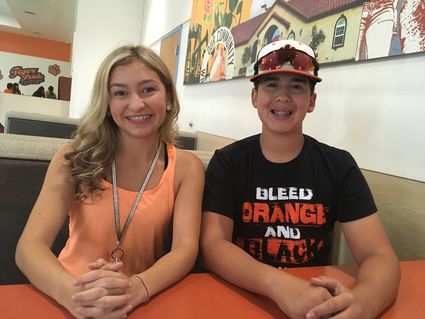 Wasco High School's Associated Student Body members are active in both the school and the local community.

ASB Community Representatives Ricardo Carriedo and Elisa Flores are both looking forward to their year on the school's student council.

Some of their responsibilities include school events such as the freshman lunch and the downtown rally for the annual Wasco vs. Shafter rivalry game.

"This year we are looking forward to getting the community involved in several ways," Ricky Carriedo said. "We are going to try to get local businesses involved, too."

He also played on a traveling baseball team and played second base on the school's junior varsity team in 2018. "I am pretty sure I'll be on varsity this year," he said.

Elisa Flores is a varsity cheerleader and has been on the squad for several years. She is one of the 10 candidates in this year's Wasco Rose Queen pageant. She has been taking roping lessons for a while and will be demonstrating her skill in the talent portion of the pageant.

Both students already have an idea where they want to go to college. Ricky is planning on attending Point Loma in San Diego, while Elisa is anticipating going to California State University, Bakersfield, to become a teacher.

As far as the ASB goes, its members are leaders in the school. They provide and support student activities and are the voice of WHS students to staff, the community, and the district. Their goal is to get as many people and businesses in Wasco involved in the events happening within the community and to reach 100% student involvement.

All ASB members must be trustworthy, good leaders, honest and willing to work hard.

Carriedo and Flores are enthusiastic about this next year's challenge. "I'm having a happy year," Elisa Flores said. "I love being on varsity cheer and a member of ASB at school."