Frank Thiessen: 'No one will ever be like him' 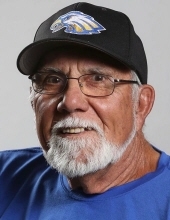 The news tore quickly through Wasco High School and Bakersfield Christian High School that Coach Frank Thiessen had passed at 81.

Relationships varied, with every combination of coach, friend, biology teacher and confidante. But the general consensus is that he was a legend; he was one-of-a-kind.

Thiessen was a Wasco native and continued his education at Fresno State.

He was a tennis player his entire life, including throughout high school and college. Even though he was accepted into University of Southern California Medical School with plans of becoming a doctor, he decided to forego USC and instead went out on the pro tennis circuit for a couple years before accepting his first teaching assignment at Fowler High in the 1960s. He was hired as a biology instructor, as well as a coach for several sports including tennis.

That same year, at age 79, Thiessen was inducted into the Bob Elias Hall of Fame.

"He was my football coach my freshman year at Wasco High," Joe Hively said. "Junior year he was my biology teacher, coach, and counselor."

Hively describes Thiessen as an amazing person. "Students felt like he actually wrote their textbook because he was so knowledgeable.

"He would help you in any way he could," Hively added. "He pushed you to become better than you ever thought you could be."

Additionally, Hively brought up a story about Thiessen paying all the college application fees for one of his high school students that he felt was someone who should go to college. "He always did things like that for his students."

Also, Hively stated that Thiessen's students played in a lot of tennis tournaments. "He won over 20 valley titles in tennis," Hively said.

Thiessen coached all levels of football such as frosh-soph, junior varsity, and varsity.

During the 1960s, Thiessen also served in the military reserves.

"Players talked to him like he was a doctor," Hively added. "They talked to him about classes, grades, and he would even pop their backs if needed. They used to call him 'Doc' Thiessen."

Hively added that Thiessen was always on top of everything. Prior to his death, he was still involved in the Central Valley Tennis tournaments.

According to Hively, "No one will ever be like him."

A Memorial for Coach Frank Thiessen will be held at 10 a.m. on Saturday, Aug. 23, 2019 at Bakersfield Christian High School.

"No one could ever say anything negative about him," Hively concluded.