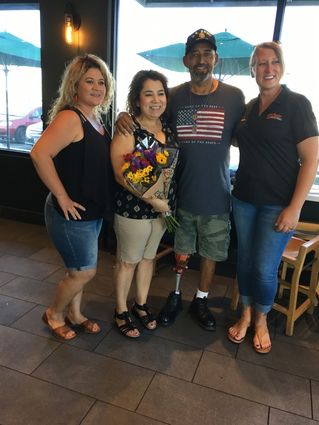 Small towns are known for having tight communities in which everyone knows everyone's name. That is definitely the case with this year's Wasco Festival Grand Marshalls, Danny and Petra Rueda.

Both Petra and Danny were surprised to learn they had been selected, since the honor was help a secret until they were told at a Starbucks gathering earlier this month. They will be highlighted on Friday evening, Sept. 6, at the Wine and Roses event and will lead the Saturday, Oct. 12, parade through Wasco.

Danny was born in Wasco and Petra was born in Bakersfield, but both were raised in Wasco and both went through the Wasco school system. They didn't go to school together, since Danny is a few years older than Petra.

"We were originally called by Orquidea Ocampo to talk about the festival. I thought we were going to discuss the car show that the VFW puts on during the event; however, when we got to Starbucks, we were shocked when a group of people shouted 'SURPRISE!' and the chair of the Festival Committee, Kayla Castillo, announced why we were really meeting.

"I was nervous," Petra said. "My heart was racing so fast, and I was sweating."

The Ruedas hosted two of the Wasco Reserves' baseball team players this summer. He also arrange housing in the VFW hall to any player who didn't have a host family. Because of that, both became close to their young houseguests.

"One of our boys, player Alex Hernandez, gave me his signed bat when he left to return to Arizona," Petra said. "I was so moved; I still get a lump in my throat when I talk about it."

Petra worked part-time for the WUESD for a couple of years and is currently employed with the Kern County Human Services Department as an eligibility worker. She began working full time when Danny retired in 2005.

The Ruedas have two children, 29-year-old Jose Rueda, who lives in Florida and has their first grandson, 1-year-old Jaxson Rueda, and 24-year-old daughter Victoria Rueda, who is currently attending California State University, Bakersfield and studying criminal justice and communications.

"I'm proud to be a grandparent," Danny said, sharing a picture of Jaxson.

The Ruedas are obsessed with National Football League) teams – in particular, the San Francisco 49ers. They attend as many games as they can and bring Victoria along when she is available. Once in a great while, he will post on Facebook that he has tickets available, but that doesn't happen too often.

Both are involved in volunteering within the community. Danny volunteers at the VFW, Knights of Columbus, Elks, WUESD and on the advisory committee of the Wasco State Prison board.

Beside working full-time, Petra volunteers on the Wasco Planning Commission.

In addition, she loves hosting their annual Super Bowl party.

Both like traveling and plan on visiting New Orleans in December. "I've been before," Danny said. "This will be Petra's first time." They enjoy traveling together and try to do some traveling every year.