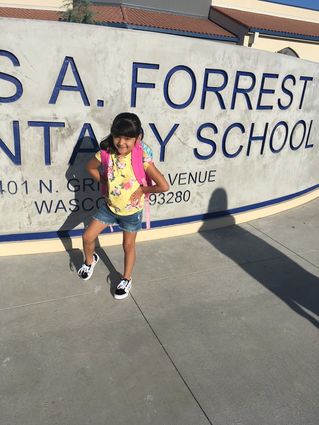 Perched on top of the Forrest School sign were, from left, first-grader Sophia, fourth-grader Emily and third-grader Martin Verdoza.

After summer break, students began their annual trek to their campus on Monday. Two schools in particular were anxiously awaiting the beginning of school so that their new campuses could be experienced.

The new James A. Forrest Elementary School, with its Spanish-style architecture and curved archways, was a welcoming site to the parents excited that their children were attending a brand-new school. 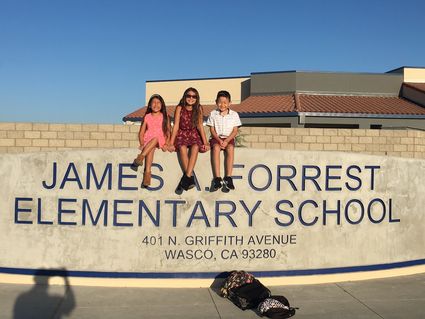 Kindergartener Sophia Moreno was excited to be at Forrest for her first day of school.

In another part of the city, parents and students looked forward to the new construction at Palm Avenue. Several students took pictures on the stairs in the front of the school.

According to Assistant Superintendent Brad Maberry, attendance at the schools on Monday was good: Teresa Burke had 594, Karl Clemens had 559, James Forrest had 596, John Pruitt had 592, Palm Avenue had 594 and Thomas Jefferson had 544.

Some students at Forrest braved sitting on top of the school sign while their father took a photograph.

At Palm Avenue, many students gathered in groups to survey their surroundings. Several were comforted when Outreach Coordinator Kimberly Rodarte arrived on the school site. She was warmly greeted by those who knew her from Thomas Jefferson.